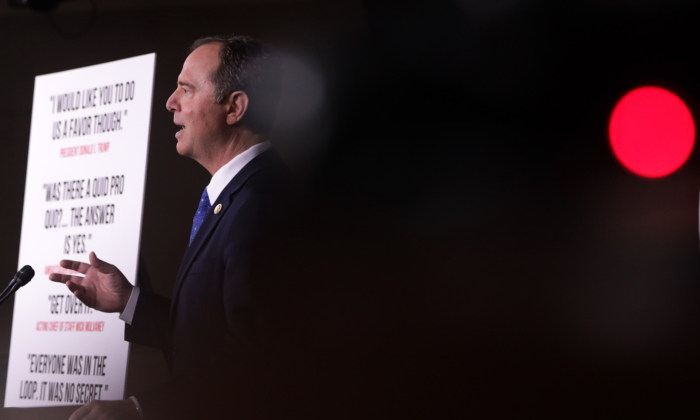 “The Democrats’ impeachment charade is flailing, and desperate people do desperate things,” Nunes said in a statement. “So Schiff suddenly published phone records of myself, current and former Republican staff members, and a journalist whose reporting he doesn’t like.”

“It’s a gross abuse of power for a congressman to go after his political opponents, staffers, and reporters in this way, but it’s characteristic of the way Schiff has run this entire show. He’s going to need a long rehabilitation period when this is over.”

Over the course of the impeachment probe, Schiff obtained the call records of Nunes, Republican committee staff members, two of President Donald Trump’s personal attorneys, and an investigative journalist, according to the Democrats’ impeachment report released on Dec. 3. The Democrats disclosed the details of the calls, including the time of day and duration of each conversation, in the 300-page report.

The move drew criticism because the communications between attorneys and clients as well as journalists and sources are considered sensitive. The collection and disclosure of calls by Nunes is especially sensitive, considering that he is Schiff’s Republican counterpart on the House Intelligence Committee, which held impeachment inquiry hearings in October and November.

The report shows dozens of call records in the April 10–24 timeframe, including calls between one of the president’s personal attorneys, Rudy Giuliani, and Nunes. The records reflect several conversations between investigative journalist John Solomon and Lev Parnas, an associate of Giuliani. Parnas also spoke with Nunes and Giuliani, the records show. The logs also feature calls between Giuliani and the White House, among others.

“The mere fact I had numerous calls with the White House does not establish any specific topic,” Giuliani wrote on Twitter on Dec. 4. “Remember, I’m the President’s attorney.”

The mere fact I had numerous calls with the White House does not establish any specific topic. Remember, I’m the President’s attorney.

“They’ve already taken away [the president’s] right to call witnesses, cross-examine, confront his accusers, or be represented by counsel at hearings. Now he can’t talk to his counsel on the telephone?” Giuliani said. “This is CNN’s version of America? Coming to a theatre near you!”

They’ve already taken away @realDonaldTrump’s right to call witnesses, cross-examine, confront his accusers, or be represented by counsel at hearings. Now he can’t talk to his counsel on the telephone?

This is CNN’s version of America? Coming to a theatre near you!

It’s unclear how Schiff obtained the records. Parnas and his associate, Igor Fruman, were indicted earlier this year for an alleged scheme to route foreign money to the U.S. elections. Investigators in the case likely obtained Parnas’s call logs.

A spokesperson for Schiff didn’t respond to a request by The Epoch Times for comment. Schiff said on Dec. 3 that the records showed “considerable coordination” between the parties currently under investigation in the impeachment probe.

An attorney for Parnas also didn’t respond to a request for comment. Parnas and Fruman helped Giuliani gather evidence about Ukraine’s interference in the 2016 election.

The House Intelligence Committee on Dec. 3 voted to approve the impeachment report. The document was expected to be presented before the House Judiciary Committee, which held its first hearing on Dec. 4.

Democrats running the impeachment inquiry allege that Trump abused his power in order to help his 2020 reelection campaign by pressuring Ukraine to investigate Joe Biden, a potential political opponent.

During a July 25 call with Ukrainian President Volodymyr Zelensky, Trump asked Zelensky to “look into” the firing of Ukrainian Prosecutor General Viktor Shokin. Shortly before he was forced to submit his resignation, Shokin’s office seized the property of Mykola Zlochevsky, the owner of Burisma, a Ukrainian gas company. At the time of the seizure, Joe Biden’s son Hunter Biden held a paid position on the board of Burisma. Joe Biden has bragged about forcing Shokin’s ouster by withholding from Ukraine $1 billion in loan guarantees.

“I have no reason at the present time to believe Congress has subpoenaed my phone records,” Solomon said in a statement to The Epoch Times. “The records released are attributed to AT&T, which is not my carrier.

“But their release by a congressional committee, particularly with no context or effort to ascertain my side of the story, are an affront to fairness and are certain to have a chilling effect on my First Amendment rights as a reporter.”