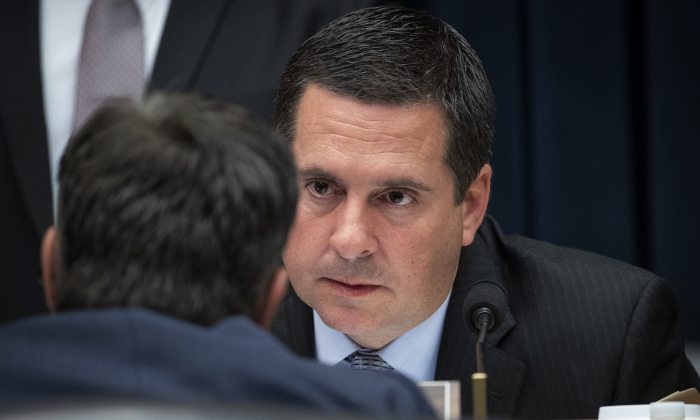 House Intelligence Committee ranking member Devin Nunes (R-Calif.) is looking to learn more about Joseph Mifsud, the mysterious Maltese professor whose statements reportedly trace back to the origin of the FBI’s Russia-collusion investigation.

Nunes wrote a letter (pdf) on May 3 to the heads of the FBI, CIA, the State Department, and the National Security Agency requesting all documents related to Mifsud.

In the indictment against Trump campaign aide George Papadopoulos, special counsel Robert Mueller portrayed Mifsud as a Russian asset. In the letter, Nunes points to evidence of Mifsud’s extensive ties to Western governments and intelligence, including the U.S. Department of State and the FBI. Nunes argues that Mifsud’s true allegiance should be ascertained.

“If Mifsud has extensive, suspicious contacts among Russian officials as portrayed in the Special Counsel’s report, then an incredibly wide range of Western institutions and individuals may have been compromised by him, including our own State Department,” Nunes wrote.

In April 2016, Mifsud told Papadopoulos that Russia had dirt on rival presidential candidate Hillary Clinton in the form of thousands of emails. Weeks later, Papadopoulos repeated that claim to Australian diplomat Alexander Downer, who then passed the information to American authorities. The FBI, in turn, used this conversation between Downer and Papadopoulos as the reason to start the Russia investigation, according to the final report (pdf) by the special counsel.

The special counsel finished his investigation in March, concluding that there is no evidence of collusion between the Trump campaign and Russia. The final report shows that Mueller’s team didn’t find any evidence that Papadopoulos informed the campaign about what he learned from Mifsud.

Nunes points out that Mueller’s final report includes many details on Mifsud’s ties to Russia but omits entirely the trove of evidence on Mifsud’s extensive ties to Western governments and intelligence. For example, the special counsel’s report cites an article by The Guardian to establish that Papadopoulos met Mifsud at Link Campus University in Rome. The report quotes the Guardian to describe the university as “a for-profit institution headed by a former government official,” but omits reporting from the same article suggesting that the university “had a reputation for being closely connected to some elements within the Italian intelligence services.”

The special counsel interviewed Mifsud in February 2017, more than six months after starting an investigation for which he served as the origin. Mueller’s report alleges that Mifsud lied to the investigators during that interview. Unlike Papadopoulos—who served time in prison for lying to the FBI about his contacts with Mifsud—the special counsel never charged Mifsud with a crime for lying to the bureau about his contacts with Papadopoulos.

Nunes points to the relatively late date of the FBI’s interview with Mifsud to ask how the FBI knew to question Papadopoulos about Clinton’s emails repeatedly in 2016 and 2017. Papadopoulos vehemently denies having told Downer anything about Clinton’s emails, claiming he had only mentioned to the Australian diplomat that Russians had “dirt” on the former secretary of state.

Nunes suggests the FBI could only be posing questions about emails if the bureau “already somehow received the information directly or indirectly from Mifsud himself.”

On May 2, The New York Times identified a second spy who approached the Trump campaign in 2016. The woman, whose pseudonym is Azra Turk, asked Papadopoulos in London whether the Trump campaign was working with Russia. Turk pretended to be an aide to Stefan Halper, the professor identified last year as an FBI spy.

The letter by Nunes is part of several inquiries looking at the origins of the FBI’s investigation of the Trump campaign. Attorney General William Barr, Justice Department Inspector General Michael Horowitz, and the Senate Judiciary Committee are conducting related inquiries.