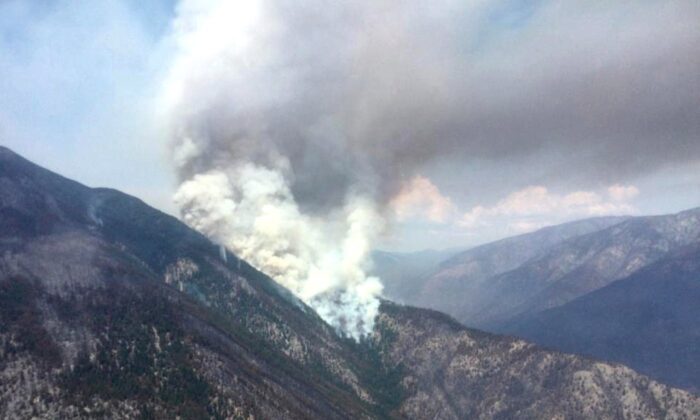 Smoke from the Nohomin wildfire grows toward the Stein Valley west of Lytton, in British Columbia, July 28, 2022. (The Canadian Press/HO-BC Wildfire Service)
Canada

Number of Wildfires Grows in BC, but Cooler Weather Offers Firefighters a Breather

The BC Wildfire Service says five fires that either threaten public safety or are highly visible are now burning in the province, up from two just a day earlier.

Evacuation alerts are posted for the fire northwest of Kamloops, the blaze outside Kaslo and for one of the remaining two wildfires of note, the 37-square-kilometre fire near the Stein Valley west of Lytton.

Fire officials say that fire, first reported last Friday, showed “no significant growth” overnight and crews are working quickly to take advantage of cooler weather this week before temperatures in the high 30s are forecast to return this weekend.

The Regional District of Okanagan-Similkameen expanded evacuation alerts to cover more than 40 additional properties Wednesday, in addition to the more than 400 placed on alert over the weekend and 300 ordered evacuated, including the Apex Mountain Resort.

The wildfire service says there are 88 active fires in the province and almost three-quarters have been caused by lightning, while just under eight percent are linked to human activity.

One unoccupied cabin has been destroyed southwest of Penticton and numerous structures were lost in the early days of the wildfire west of Lytton, but there are no reports of losses related to any other wildfires in B.C.

The wildfire service has not commented further since issuing a news release Tuesday about a Conair aircraft that made a forced landing while working on a blaze in southeastern B.C.

The statement says the Conair 802 Air Tractor Fireboss Skimmer, a type of water-bomber, reported engine failure while working near Cranbrook.

The pilot was given a medical assessment after the landing.

Conair, which operates under contract to the wildfire service, has not yet replied to a request for information about the pilot’s condition or a cause of the forced landing.