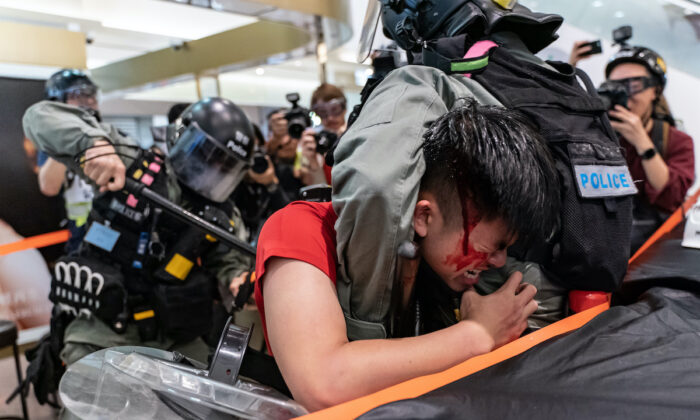 A man is detained by riot police during a demonstration in a shopping mall at Sheung Shui district in Hong Kong, on Dec. 28, 2019. (Anthony Kwan/Getty Images)
HK Current Affairs

In less than three years, the number of political prisoners in Hong Kong has risen rapidly, and now exceeds 1,000, according to a new report that says this situation indicates the rapid decline of Hong Kong into an authoritarian society.

The 33-page report, recently released by Hong Kong Democracy Council (HKDC), a non-partisan, non-profit, organization headquartered in Washington, stated that from June 9, 2019, when Hong Kong’s anti-extradition protest broke out, to May 10, 2022, 1,014 people have been convicted as political prisoners in Hong Kong.

“This exponential increase has occurred in a little under three years.” “The large number of political prisoners is a key indicator of the deterioration of the rule of law, judicial independence, and protections of civil and political liberties, marking Hong Kong’s rapid descent into authoritarianism.”

The report also pointed out that with a fast growing population of political prisoners, Hong Kong’s situation is as distressing as that of Belarus, Burma, and Cuba, where authoritarian governments have recently cracked down on protest movements.

“In few places in the world has the state of human rights deteriorated so rapidly as in Hong Kong over the past three years, with the rights to freedom of assembly, freedom of association, freedom of expression, and political participation all indefinitely suspended, unreasonably restricted, or abolished,” the report said.

In addition, remand has become a means of keeping political opponents in prolonged pretrial detention, largely due to the Hong Kong National Security Law implemented in June 2020.

“Overall, the situation in Hong Kong constitutes a grave human rights crisis to which the rest of the world must respond more actively than it has up to now.”

HKDC calls on the U.S. government to sanction the Hong Kong judges and officials in charge of national security, and expedite the creation of humanitarian pathways for those Hong Kongers victimized under political persecution.

Moreover, the organization implored the United Nations Working Group on Arbitrary Detention to speak to the Hong Kong government and recommend that all political prisoners be immediately released.

The figures presented in the report are similar to those provided by the Hong Kong Secretary for Security, Chris Tang Ping-keung, in his written reply to questions from members of the Legislative Council on April 27.

Tang said in his reply that, as of Feb. 28 this year, a total of 10,277 people have been arrested by the police in relation to the “anti-extradition” movement, of which 2,804 have been prosecuted, 1,172 have been convicted, and 939 are still on trial at the time of his reply. As of March 31 this year, the number of people arrested in relation to Hong Kong National Security Law was 175, including 112 individuals and 5 companies that were prosecuted.

In early 2019, the Hong Kong government introduced the Fugitive Offenders and Mutual Legal Assistance in Criminal Matters Legislation (Amendment) Bill 2019, commonly known as Hong Kong’s new extradition law, which triggered a strong backlash from Hong Kong residents. On June 9, 2019, the Hong Kong Civil Human Rights Front organized a large demonstration against the proposed bill, which is generally regarded as the beginning of the “anti-extradition” protest.