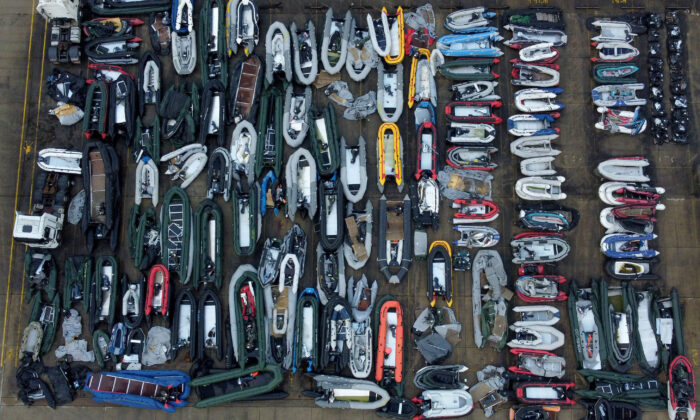 A view of one of two areas being used for boats intercepted in the English Channel by the UK's Border Force at a warehouse facility in Dover, Kent, on July 27, 2021. (Gareth Fuller/PA)
UK

Around 28,400 people have entered the UK in 2021 by the clandestine crossing of the English Channel, triple the number for 2020.

Analysis of Home Office data by the PA news agency showed that at least 28,395 illegal immigrants had arrived in small boats in the past year, while the BBC’s analysis counted at least 28,431 crossings.

Despite international efforts to crack down on people smugglers, gangs have continued to ply the Dover Strait with their deadly trade, charging thousands of pounds for a berth in flimsy inflatable boats.

The number of arrivals peaked in November 2021, when at least 6,869 illegal immigrants reached the UK despite dropping temperatures.

Between Nov. 10 and 16, more than 3,100 people made the perilous crossing, the most in any seven-day stretch in the current crisis.

The same month also saw a new record for a single day, with 1,185 people reaching British shores aboard 33 boats on Nov. 11.

The PA news agency said dinghies seen leaving French shores and being towed into Dover have noticeably increased in size over the past year, with data showing an average of about 28 people travelling aboard each small boat that arrived in the UK in 2021, up from just over 13 in 2020.

The dangers of the English Channel were laid bare on Nov. 24 when at least 27 people died as their dinghy—likened to a blow-up pool by French interior minister Gerald Darmanin—was capsized.

At least 16 people who died were Kurdish from northern Iraq, where growing unemployment and frustration over corruption had prompted many to consider the risky journey to the West.

Their bodies were returned home for burial on Dec. 26.

Charity bosses from Refugee Action, Care4Calais, and Refugee Council have criticised the UK government for not opening up more safe routes for asylum seekers, while the chair of think tank Migration Watch UK said there are “plenty of safe routes.”

Home Office minister Tom Pursglove MP said, “Seeking asylum for protection should not involve people asylum shopping country to country, or risking their lives by lining the pockets of criminal gangs to cross the Channel.”

He said the government is “reforming” its approach by “making the tough decisions to end the overt exploitation of our laws and UK taxpayers.”

Pursglove said that the public had been “crying out” for reform on immigration for two decades.

“The Nationality and Borders Bill will make it a criminal offence to knowingly arrive in the UK illegally and introduce life sentences for those who facilitate illegal entry into the country,” he said.

“It will also strengthen the powers of Border Force to stop and redirect vessels, while introducing new powers to remove asylum seekers to have their claims processed outside the UK.”