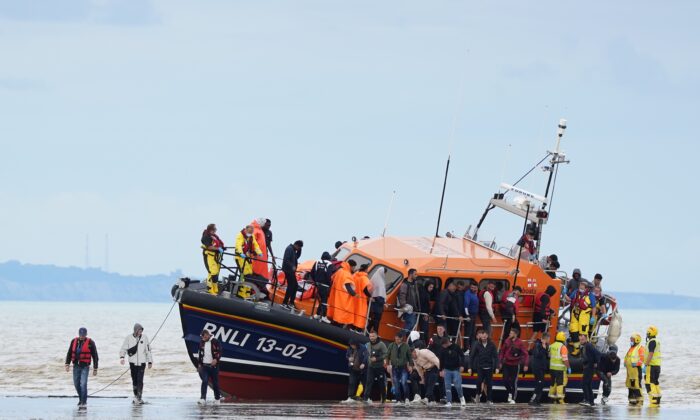 A group of illegal immigrants are brought in to Dover, England, by the RNLI, on Aug. 25, 2022. (Gareth Fuller/PA Media)
UK

More illegal immigrants have crossed the English Channel to reach the UK so far this year than in the whole of 2021, UK government figures suggest.

Last year’s total was 28,526, according to official figures.

The 2022 figure to date is nearly double the number that had been detected by this point last year, which was just under 14,500.

There have been 3,518 crossings recorded in September so far, analysis shows.

A record 1,295 illegal immigrants crossed the Channel on Aug. 22, the highest figure for a single day since the current system of record-keeping began in 2018.

The way UK authorities have been handling the small boats crossing the Channel has been widely criticised.

Almost all of the dinghies and rigid inflatable boats were intercepted by the navy, the Royal National Lifeboat Institute, or other UK law enforcement vessels, which then took the illegal immigrants ashore and handed them over to the immigration authorities.

At a meeting of the Defence Select Committee in the House of Commons on July 12, Labour MP John Spellar said the Royal Navy wasn’t stopping illegal immigrants from entering the UK but was simply escorting them into Kent ports.

In April, then-Home Secretary Priti Patel signed a deal with Rwanda that involved sending illegal immigrants who had crossed the channel to the African country.

The agreement was designed to be a deterrent to those making the journey by sea, but 23,293 people have arrived by boat since it was signed.

The first deportation flight to Rwanda was grounded amid legal challenges in June, and the matter isn’t expected to be decided by the UK courts until October.

Last month, two reports criticised the Home Office over its “ineffective” response to the challenge of illegal immigration in the channel. One said the Border Force’s approach to preventing the journeys was “ineffective and possibly counter-productive,” while the other said the initial processing of those who arrived has been “ineffective and inefficient.”