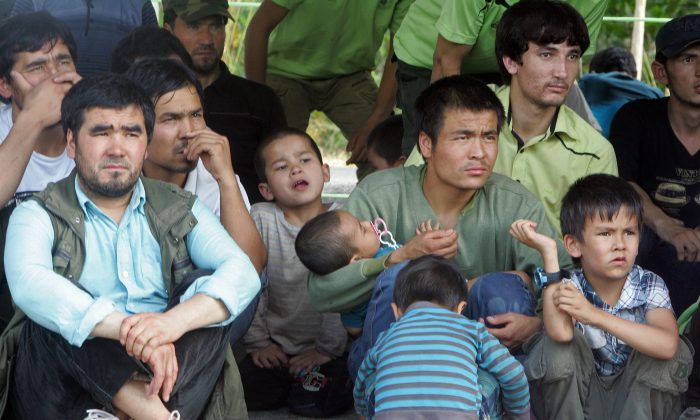 Asylum seekers sit before boarding trucks as Thai Immigration officials escort them to a court in Songkhla, southern Thailand March 15, 2014. Thailand sentenced dozens of asylum seekers thought to be from China's Uighur minority for illegal entry, an official said, despite a US appeal for their protection. (Tuwaedaniya Meringing/AFP/Getty Images)
China Human Rights

The number of Chinese asylum seekers increased by nearly 800 percent between 2012 and 2021, according to data from the United Nations High Commissioner for Refugees (UNHCR).

These people were forced to leave China, which has not been ravaged by war in the past decade and declared itself to have achieved “moderate prosperity” in 2021. The zero-COVID restrictions and strict border controls in 2020 and 2021 were not able to stop people from fleeing China.

Since 2012, there have been some 730,000 Chinese seeking asylum, and more than 170,000 people are living outside of China under refugee status, according to a June report of Safeguard Defenders, a nongovernmental organization based in Spain.

“In one year of Xi Jinping’s rule, 2021, China has now had more asylum-seekers than during the last eight years of his predecessor Hu Jintao’s rule,” wrote Safeguard Defenders in the report.

It also noted that the United States has been the most popular destination for Chinese asylum seekers, which saw 88,722 persons seeking asylum there, and Australia is the second most popular, with 15,774 asylum seekers last year.

The number of Chinese asylum seekers continues to increase, “with no end in sight,” said the organization.

Many are seeking asylum because they have few other options to protect their safety and wellbeing. However, those who go abroad may be hunted down and brought home.

According to a January report of Safeguard Defenders, the Chinese Communist Party (CCP) touted that 10,000 Chinese citizens have been successfully brought back from over 120 countries across the world since it launched Operation Fox Hunt in 2014.

The 69-page dossier goes into detail about how each method is carried out, with data and case studies, to forcibly return Chinese nationals (or non-Chinese nationals born in China) located abroad.

One case etails how the CCP threatened a target’s family. Wang Jingyu, born in 2001, left China for Europe in 2019. In an online post in February 2021, he questioned China’s official death toll after a border clash with Indian troops in 2020. Police in his hometown city of Chongqing, charged Wang with “picking quarrels and provoking troubles” and detained Wang’s parents, in a bid to force Wang to return to China.

They also contacted Wang directly by phone to pressure him to come back. In April 2021, Wang was arrested in Dubai while changing planes for a flight to the United States. He was released after the story broke in western media and human rights NGOs and the U.S. Department of State put pressure on the UAE.

Another case involves kidnapping abroad. Dong Guangping, is a Chinese human rights defender who had already served three years in prison in China on charges of “inciting subversion of state power” in the early 2000s. Dong managed to flee to Thailand, where he was granted official refugee status by the UNHCR. “As he awaited resettlement to Canada in a Bangkok immigration detention center, Chinese police walked in, handcuffed him in front of Thai officers, and led him out,” the report reads.

More cases of the Chinese diasporas being targeted and kidnapped by the CCP are disclosed in the report.

“Under Xi Jinping, the CCP has deepened, widened, and strengthened its persecution of all perceived sources of opposition ranging from underground churches, Falun Gong practitioners, Tibetans, Mongolians, Uyghurs, academia, and the media, not to mention its sweeping crackdown in Hong Kong,” said the report.

The 10,000 cases of forced return to China are just “the tip of the iceberg,” reads the report.

“The rapidly expanding global practice poses a severe threat to national sovereignty and individual rights everywhere,” the report states. “The CCP’s message is that nowhere is safe; fleeing overseas will not save you, there is no escape.”

“National awareness and investigations, as well as targeted actions to counter these operations and protect those most at risk are key to upholding the international rules-based order,” said the report in its recognition of the need for action.

Wu Minzhou contributed to the article.