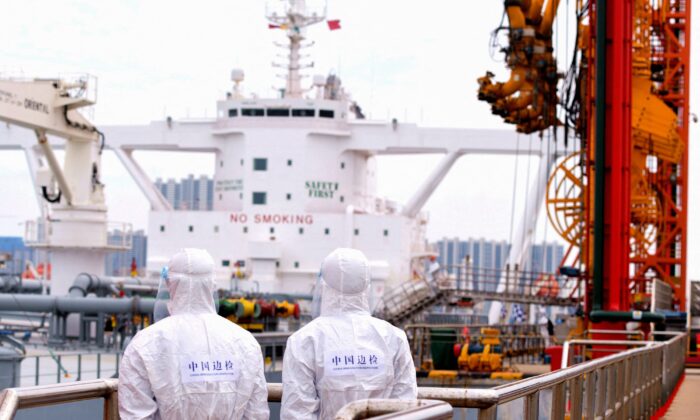 According to data released by the Chinese Customs on May 9, from January to April, China’s inbound and outbound freight vehicles, including cars, trains, ships, and planes, totaled nearly 3.76 million, which is 50.7 percent lower than last year. In April, the total number of inbound and outbound freight vehicles (cars, ships, and planes) in China was 876,000 vehicles, a year-on-year decrease of 43 percent.

Since the outbreak of the CCP virus, the regime has tightly controlled the ports of entry and exit. Under strict closure and control measures, China’s border ports are frequently closed, disrupting inbound and outbound logistics.

Among the various transport modes, the number of entry and exit cargo trucks has decreased the most. From January to April this year, 2.688 million trucks entered and left China’s border ports—a year-on-year decrease of 58.4 percent.

In early December last year, three China-Vietnam ports were closed on the Guangxi border within two weeks after an infected person was found in Ningming County, Guangxi Province. One was closed simply because an incoming Vietnamese driver tested positive for COVID-19.

On December 28 last year, Pingxiang City, Guangxi Province announced a 4-week ban on Vietnamese pitaya (dragon fruit) after the COVID-19 virus was found on dragon fruit and packaging imported from Vietnam three times in a row. In February this year, a positive case was found in Hekou County, a border area in Yunnan Province, China, and the nearby Sino-Vietnamese port was subsequently closed.

According to Chinese customs data, in the first four months of this year, the inbound and outbound trade volume between China and Vietnam fell by 5.1 percent compared with the same period last year.

A COVID-19 epidemic broke out in Hong Kong in February this year. On February 27, the Shenzhen Pandemic Prevention Command Office issued a notice that from March 1, Guangdong-Hong Kong cross-border truck drivers can only enter the country with a negative nucleic acid test certificate completed within the last 24 hours. When entering the country for the first time, drivers must undergo a rapid test and a routine nucleic acid double test. Any truck driver who tests positive at the port (including close and second-close contacts) is not allowed to enter the country for 21 days.

According to customs data, in the first four months of this year, the import and export trade volume between inland China and Hong Kong fell by 9.2 percent year-on-year, 26.6 percent of the drop was in import trade volume.

On China’s western border, the Burgastai and Laoyemiao ports on the border between Xinjiang, China and Mongolia have been closed since January 2021 due to the epidemic. Their 15-month closure affected the import of Mongolian coal and other ores to China.

In addition, the pandemic closure and control measures have affected the number of inbound and outbound ships. Based on customs data, in the first four months of this year, a total of 91,000 vessels entered and departed from Chinese ports, a year-on-year decrease of 2.6 percent.

Since the Shanghai Lockdown began in March, the number of trucks entering and leaving Shanghai Port has decreased significantly. According to estimates by some member companies of the Shanghai Branch of the European Union Chamber of Commerce in China, the cargo handling volume at Shanghai Port has dropped by 40 percent. Although Ningbo Port has filled-in, there is still a 15-20 percent gap.

China-Europe freight trains and planes were negatively impacted after the full-scale outbreak of the Russia-Ukraine war.

After the outbreak of the Russia-Ukraine war, many countries (including Russia) closed airspace to each other. Thus, international flights operated by foreign companies need to bypass Russian airspace, resulting in a significant increase in costs, and affecting China-Europe air cargo.