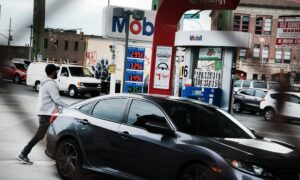 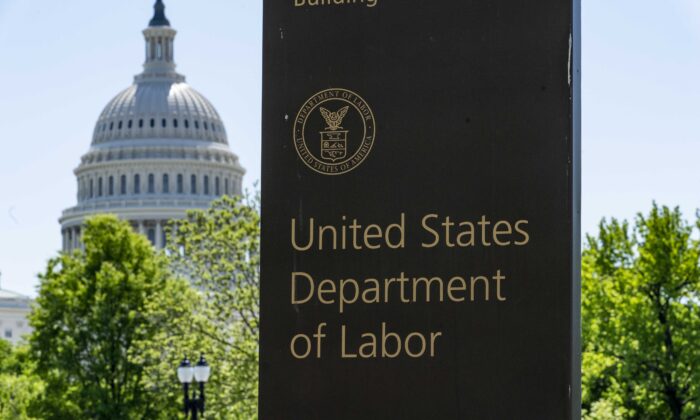 The entrance to the Labor Department near the Capitol in Washington on May 7, 2020. (J. Scott Applewhite/AP Photo)
Business & Economy

The number of American workers filing for unemployment edged up last week following four consecutive weeks of declines, as the labor market continues along its bumpy road to recovery.

First-time filings for unemployment insurance, a proxy for layoffs, came in at 353,000 for the week ending Aug. 21, a rise of 4,000 from the previous week’s revised level of 349,000, the Labor Department said in a statement (pdf).

The national unemployment rate fell by 0.5 percentage point over the month in July, dropping to 5.4 percent, according to the Labor Department. That’s 4.8 percentage points lower than in July 2020 and far lower than the pandemic peak of 14.8 percent in April of last year.

Still, despite the encouraging unemployment rate print last month, the Labor Department’s jobless claims report showed that just over 12 million Americans were receiving some form of unemployment assistance in the week ending Aug. 7, an over-the-week increase of 180,000.

But while the labor market recovery is far from complete, workers have been buoyed by a record-high number of available job openings, boosting their bargaining power and forcing businesses to raise wages. The so-called quits rate, which is the proportion of people who voluntarily leave their jobs and is a barometer of worker confidence in being able to find a better job elsewhere, was 2.7 in June, the month for which the latest figures are available, just slightly lower than April’s record high of 2.8.

“Most individuals in the workforce surveyed by Bankrate indicate they expect to look for a new job over the next twelve months,” Hamrick told The Epoch Times. “These individuals are prioritizing work and workplace flexibility as well as higher pay.”

Difficulties in hiring and retaining staff have prompted businesses to raise wages.

Lack of child care facilities, fears of contracting the virus, and expanded unemployment benefits have been blamed for worker shortages, which are partly contributing to employment remaining 5.7 million jobs below the February 2020 peak.

At least 25 states led by Republican governors have pulled out of federal government-funded unemployment programs, including the $300 weekly top-up, which businesses and GOP leaders claimed had been encouraging jobless Americans to stay at home.

So far, there’s no clear evidence that the early termination of federal benefits has led to an increase in hiring in these states, although experts say it will likely take another month or two of labor market data to confirm the policy impact.