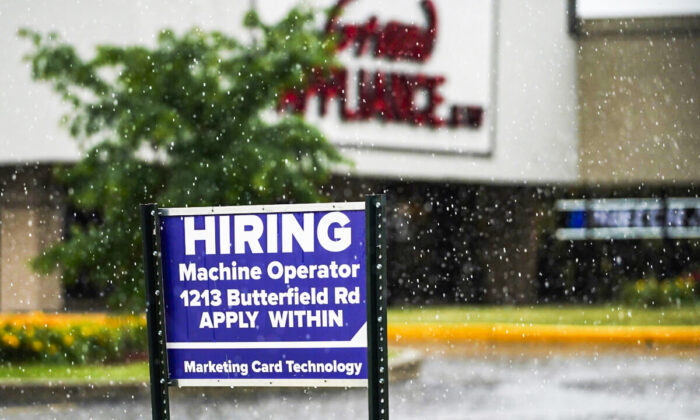 Applications for jobless claims edged down in the week ending April 9 to their lowest level since 1970, according to the U.S. Department of Labor.

The advance seasonally adjusted insured unemployment rate was 1 percent for the week ending April 9, lower by 0.1 percent from the previous week’s unrevised rate.

The unemployment claims data underscores the “continuing strength of the job market,” Mark Hamrick, Senior Economic Analyst at Bankrate told The Epoch Times. The weekly jobless claims data is seen as an indication of the tightness in the labor market.

“The claims picture aligns with the Federal Reserve’s Beige Book, showing strong demand for workers across most of the country and most sectors of industry. The shortage of available candidates remains a prevailing theme.”

Some employers are now less demanding about who they hire, even taking in employees with lower skills and qualifications, while also being more open to hybrid and remote work options.

In a recent earnings call, Bank of America CFO Alastair Borthwick pointed out that the bank’s clients are experiencing labor and wage pressure. Rising labor costs can end up eating into profit margins.

“For companies, labor costs, which account for roughly 70 percent of total costs, are far more important than materials costs,” Rubeela Farooqi, chief economist at High Frequency Economics, wrote in a note on April 19, according to Yahoo Finance.

“While wage gains are not keeping up with price increases, building cost pressures are a risk for company bottom lines.”