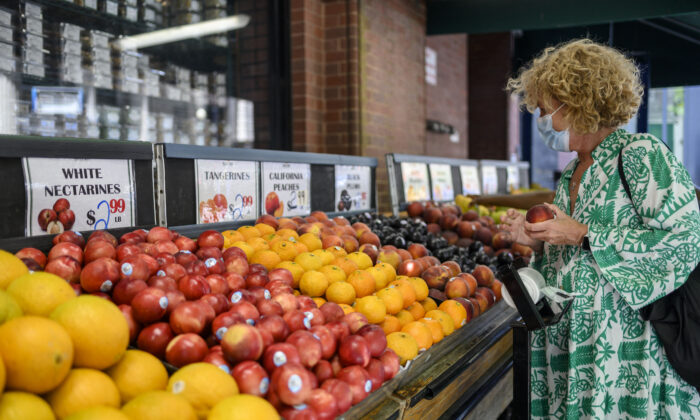 A person shops at a supermarket in New York on July 13, 2022. (Angela Weiss/AFP via Getty Images)
Economy

The majority of Americans say inflation is causing them financial hardship, according to a new poll.

While the Biden administration heralded a pause in the rise of inflation for the month of July, a new Gallup poll indicates that Americans are feeling the pain more now than at the beginning of this year.

“A majority of Americans, 56 percent, now say price increases are causing financial hardship for their household, up from 49 percent in January and 45 percent in November,” Gallup said. “The latest reading includes 12 percent who describe the hardship as severe and 44 percent as moderate.”

The survey was conducted Aug. 1–22 after that pause in inflation. More federal data will be released this month showing whether inflation took off again in August or remained steady.

The survey found middle income Americans are feeling the pain as well.

Americans are cutting back on spending, traveling less, and trying to up their income to deal with the higher prices.

“The most common action, mentioned by 24 percent of those experiencing hardship, is to reduce spending, including buying less in general or buying only essential items,” Gallup said. “Another 17 percent say they are traveling less or canceling vacations, while the same percentage indicate they are driving less or trying to use less gas. Other common strategies for dealing with higher prices are buying cheaper goods or generic brands of products (12 percent), eating out less (10 percent), buying fewer groceries or growing their own food (10 percent), staying home (8 percent), and cutting down on entertainment expenses (8 percent).

“Seven percent say they have tried to increase their income by working more hours, finding a second job or looking for a new job. Three percent say they are delaying medical procedures or appointments, and another 3 percent are delaying home improvement or maintenance projects,” Gallup added.