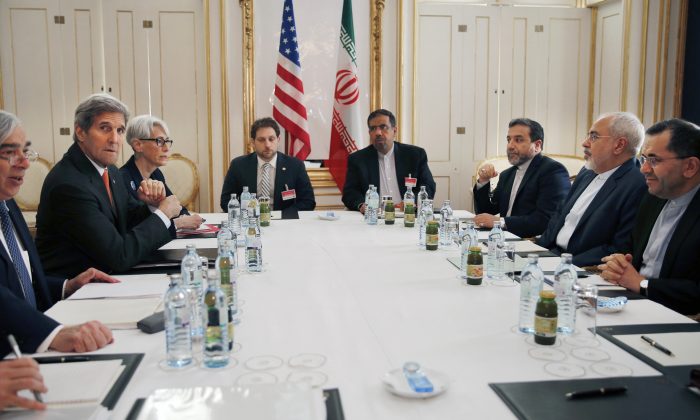 From left, U.S. Secretary of Energy Ernest Moniz, U.S. Secretary of State John Kerry and U.S. Under Secretary for Political Affairs Wendy Sherman, attend a meeting with Iranian Foreign Minister Mohammad Javad Zarif, second from right, at a hotel in Vienna, Austria, Sunday, June 28, 2015. After two years of high-pressure gatherings, a sense of predictability emerged in the negotiations between Kerry and Zarif. (Carlos Barria/Pool Photo via AP)
Middle East

VIENNA— With the target date for a deal less than two days off, Iran’s foreign minister prepared to head home for consultations Sunday before returning to join counterparts from other countries at the negotiating table to push for a breakthrough.

Iranian media said Mohammed Zarif’s trip was planned in advance. Still, the fact that he was leaving the talks so close to the Tuesday deadline reflected his need to get instructions on how to proceed on issues where the sides remain apart — among them how much access Tehran should give to U.N. experts monitoring his country’s compliance to any deal.

The United States insists on more intrusive access than Iran is ready to give. With these and other disputes still unsolved, senior European politicians acknowledged that a Tuesday target deadline for an Iran nuclear deal could slip, and the talks might continue into early July.

They spoke as Zarif and U.S. Secretary of State John Kerry met in Vienna for their third encounter since Saturday. Most other foreign ministers of the six nations involved in the talks were expected to join later, in a concerted diplomatic effort to wrap up the negotiations by or close to the June 30 target date.

All seven nations at the negotiating table insist that Tuesday remains the formal deadline for a dal. But with time running out, officials conceded there could be slippage.

“If a few days more are needed, we will take them,” said Federica Mogherini, the European Union’s top diplomat. Asked about the chances of a deal, she told reporters: “It’s going to be tough … but not impossible.”

German Foreign Minister Frank-Walter Steinmeier, meanwhile, told German media that June 30 could have “more than 24 hours” if no agreement is achieved by midnight and negotiators continue their talks.

“I am convinced that if there is no agreement, everyone loses,” Steinmeier was quoted as saying. “Iran would remain isolated. A new arms race in a region that is already riven by conflict could be the dramatic consequence.”

Both sides recognize that there is leeway to extend to July 9. As part of an agreement with the U.S. Congress, lawmakers then have 30 days to review the deal before suspending congressional sanctions.

But postponement beyond that would double the congressional review period to 60 days, giving both Iranian and U.S. critics more time to work on undermining an agreement.

Arguing for more time to allow the U.S. to drive a harder bargain, Israeli Prime Minister Benjamin Netanyahu — a fierce opponent of the talks — weighed in on Sunday against “this bad agreement, which is becoming worse by the day.”

“It is still not too late to go back and insist on demands that will genuinely deny Iran the ability to arm itself with nuclear weapons,” he said.

On Saturday, diplomats told The Associated Press that Iran was considering a U.S.-backed plan for it to send enriched uranium to another country for sale as reactor fuel, a step that would resolve one of several outstanding issues.