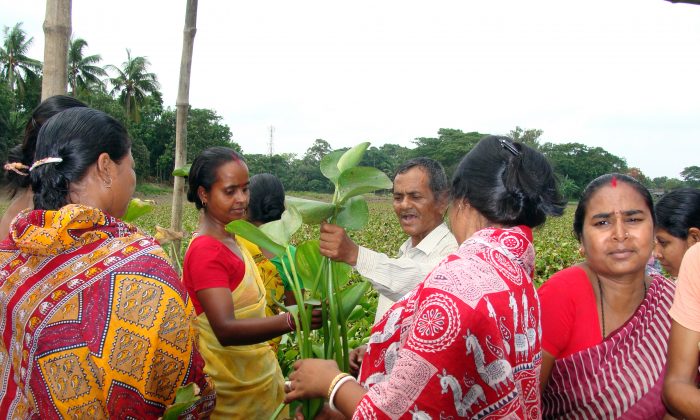 Women in Magra village located in West Bengal state of India, study Hyacinth plant. They are trained by an innovative enterprise Earth Craft to create lifestyle products out of the weed. (Courtesy of Earth Craft)
India

An Indian entrepreneur has converted the nuisance water-weed threat into an economic opportunity by creating value-added utility items and generating an alternate healthier livelihood for villagers in West Bengal.

In Magra village, located in Kolsur block in North 24-Parganas district of West Bengal, the water hyacinth usually chokes all water canals, leading to overflow in the rainy season.

Bikram Mitra, a 45-year-old localite, thought of converting this water-choking weed into eco-friendly and aesthetic products. He established a small support group, named Earth Craft, with the help of a local non-governmental organization, Swnirvar.

According to him, the villagers had no idea that the problematic weed could be converted into products to help them make a healthier livelihood. “It took me 2-3 months to mentally prepare the villagers. Now they understand it and I get lots of support [from them],” he said.

Currently, Mitra’s little enterprise employs village men for removing the weed from the canal and women for creating paper and products out of it. “While men are paid 170 rupees ($3) per day, which is as per government directions, women earn different [wages] for different products.”

Mitra said the 105-kilometers-long canal from Nadiya to 26-Parganas, which passes through the village is covered with hyacinth; before he landed in Magra, the Swnirvar team had already tried converting this fast-growing weed into compost.

“Government has no policy on it. They clean it and throw it outside or just burn it. There’s no strategy to convert it into value-added products,” he said.

Most of the women in Magra roll bidi cigarettes at home to make a living, while local companies provide them with raw material. “It’s a hazardous work and in long term leads to respiratory problems,” said Mitra. “For rolling 3,000 bidis, which a family can do in a day, the earning is only 30 rupees ($0.55).”

According to Mitra, more women want to be trained and work with Hyacinth. “More women are interested, but I need [financial] support. We are getting a small grant from Small Industries Development Bank of India, and are planning to approach the National Institute of Design for help to design more innovative products and strategically market those products for various niche segments.”

Dr. S. Ghoshal, the principal designer at National Institute of Design’s research and development campus in Bangalore, said: “Earth Craft has the raw materials, the basic skilled man-power, tools, and has also developed appropriate marketing channels. It just needs to elevate the levels of all these factors so that, leapfrogging from the conventional and traditional designs of such products, some niche market products (such as for the hospitality sector, lifestyle sector, green building, resorts, eco-tourism, et cetera) could be developed.”

Ghosal, who is also the head of NID’s international collaborative research and development, believes that a typical market-driven design process, with a planned strategy for marketing these products, would help stabilize and integrate the back-end and the front-end of such an initiative. Any kind of elevation of Earth Craft’s work will benefit the environment, the community, and many women in West Bengal with healthier and creative livelihoods.