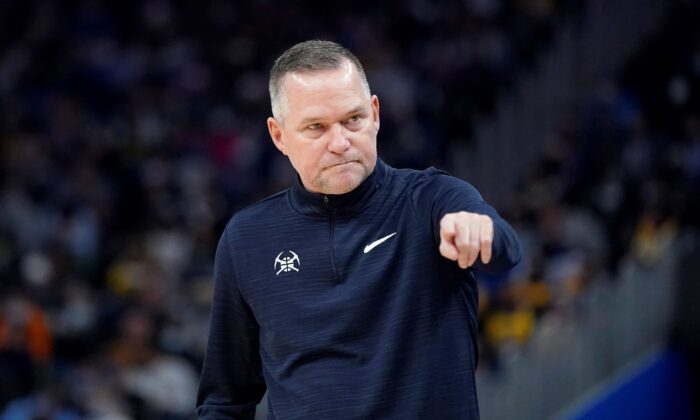 Denver Nuggets head coach Michael Malone gestures toward players during the first half of the team's NBA basketball game against the Golden State Warriors in San Francisco on Dec. 28, 2021. (Jeff Chiu/AP Photo)
NBA

The NBA postponed another game for virus-related reasons Thursday, raising the total to 11 pushed back so far this season while two more head coaches entered the league’s health and safety protocols.

Golden State’s game at Denver was postponed because the Nuggets—through a combination of injuries and a newly discovered outbreak of the virus—did not have the league-minimum eight players available to start the contest.

Had they played, the Nuggets would have also been without head coach Michael Malone. He went into the protocols on Thursday, as did Philadelphia’s Doc Rivers. The 76ers used assistant coach Dan Burke in Rivers’ place for their game Thursday against Brooklyn, a 110–102 Philadelphia win.

Also in the protocols: around 123 players, along with an untold number of other staffers from around the league—including assistant coaches, broadcasters, referees, media relations personnel, public-address announcers, stat crew members, athletic trainers, and more.

“This is mentally exhausting,” said Portland assistant Scott Brooks, who is filling in for Billups during his protocols stint.

For some teams, Thursday brought progress. Toronto, which has been decimated by the virus in recent weeks, had most of its players back for practice.

Toronto guard Fred VanVleet was among the Raptors back on the floor, after recovering from COVID-19 for a second time. VanVleet’s tale this time wasn’t particularly different from many—not all, but many—players who have spoken about their virus experience in recent weeks, with the majority saying their symptoms weren’t particularly difficult to get through.

“This was different, different experience, different symptoms, different severity,” VanVleet said. “Obviously, it’ll probably take some time for me to work myself back, but it feels much more doable than it did last year. Hopefully the worst is behind me, personally. I can’t speak for anybody else but it wasn’t too bad this time around.”

When VanVleet returns to the court in Toronto on Friday against the Los Angeles Clippers, only 1,000 fans will be allowed there to see him. Officials in Ontario said they are capping crowd sizes for indoor venues at 1,000 spectators or 50 percent capacity, whichever is less, in response to virus outbreaks.

The Raptors expect that rule to be in place for at least three weeks. They, along with the NHL’s Toronto Maple Leafs and Ottawa Senators, had recently seen their attendance capped at 50 percent because of virus concerns.

“I think it’s really a thing we don’t know much about,” Toronto coach Nick Nurse said, speaking broadly about the virus and before the new attendance rule for Ontario was announced. “I’m really, really a lot on the side of ‘I don’t think anybody knows how to stay away from it, how to catch it, how not to catch it, how to whatever, where they got it from, what happens.’ I think everybody’s in a guessing game on all that stuff. And I just try to do the best I can, as we all should.”

Through Thursday, the NBA has seen 560 players—already a single-season record—take the court this season, largely because teams have had to sign dozens of replacements to hardship contracts just to get through the periods of roster depletion caused by time missed with the virus.

That number is certain to keep rising.

“It’s mindboggling,” Brooks said. “There’s so many good players in the world. It’s just tough to make it. … They’re making an impact. They play hard and they know how to play. They’re going to be NBA players. They just have to find the right spot.”

The Nuggets-Warriors game was the second to be pushed back by the NBA in as many days for virus-related reasons, the other being Wednesday when Miami—with players in the protocols and injured—did not have the league-mandated eight available players for its scheduled game at San Antonio.

The Heat have used 15 players this season and right now, no more than five of those are available to play. They signed three replacement players on Thursday and were closing in on other deals, including one with former Miami point guard Mario Chalmers—who started on the team’s NBA championship teams in 2012 and 2013.

Chalmers last played for Miami in November 2015, and last played in the NBA for Memphis in April 2018.

“I’m ready,” Chalmers said. “I think this is more emotion than anything, showing that I’ve been really working behind the scenes and not just talking about it. I definitely feel good enough to help the team win.”