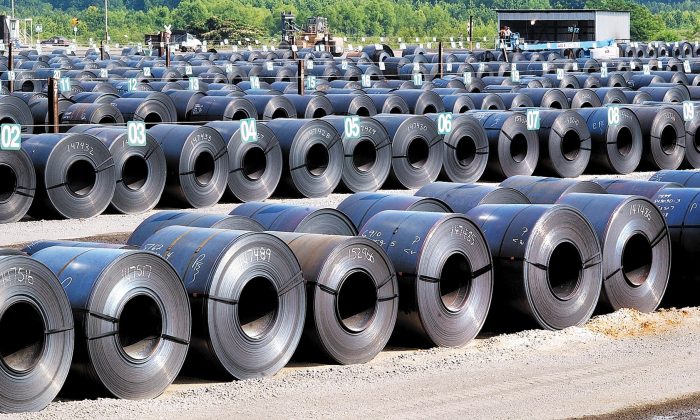 Nucor to Build New Steel Mill in US, Adding 400 Jobs

Nucor Corp. announced plans on Jan. 7 to build a $1.35 billion steel-plate mill in the United States that would create approximately 400 new jobs.

“Tax reform, continued improvements to our regulatory approach and strong trade enforcement are giving businesses like ours the confidence to make long-term capital investments here in the U.S. that create jobs and ensure our success for decades to come.”

The mill is expected to be fully operational by 2022 with an estimated output of 1.2 million tons of steel-plate products per year. The company expects to select a site for the new mill somewhere in the Midwest early this year.

Nucor already operates plate mills in North Carolina, Alabama, and Texas. The new mill will have the capacity to create products which can’t be made at the other facilities.

“By building this state-of-the-art plate mill in the Midwest—the largest plate-consuming area in the United States—we will enhance our ability to serve our customers in the region while also furthering our goal of meeting all the steel needs of our customers around the country,” said Leon Topalian, executive vice president of beam and plate products.

Trump’s tariffs had already resulted in the creation of more than 11,000 jobs by August, according to a tally by Coalition for a Prosperous America, a nonpartisan trade group representing U.S. farmers, ranchers, manufacturers.

“The evidence is that the tariffs are working. Economic growth is up, inflation is under control, many of the tariffed industries are enjoying strong recoveries in output, profits, and employment,” Jeff Ferry, CPA’s research director, said in a statement Dec. 4.

“Steel JOBS are coming back to America, just like I predicted,” Trump wrote on Twitter on Nov. 28.