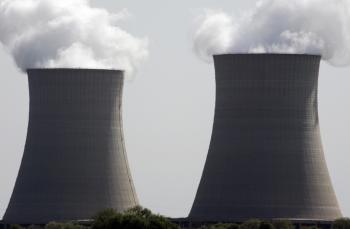 Nuclear Power: How Green Is It?

By Cassie Ryan
Print
As global warming becomes a reality, pressure is mounting on governments to find low-carbon solutions to generating electricity. Yet with close to seven billion people in the world, many scientists are questioning the capacity of renewable energies to meet the growing demands of most countries.

New developments in nuclear technology and ongoing research into reducing its associated hazards are leading various key players to take a fresh look at nuclear power.

In February, Microsoft’s Bill Gates went public about investing tens of millions of dollars into innovative reactor designs as part of his philanthropic quest for energy miracles. Then, a week later, President Barack Obama announced that the U.S. government would back over $8 billion in loans for nuclear power plants, the first new ones to be built since the 1979 Three Mile Island disaster, as part of a planned $54.5 billion nuclear kick-start program.

Despite vast improvements in safety, nuclear power’s supposedly zero-carbon image remains marred by two major issues: storing long-lived radioactive waste and preventing weaponization. In addition, “peak uranium” is predicted, and fossil fuels are required during its life cycle—for instance during mining and enrichment—along with plant construction. Therefore, uranium is presently neither a guilt-free answer nor a long-term solution.

In March at Sydney University, NASA scientist and climate change guru Dr. James Hansen pointed out that even a progressive country like Germany can currently only generate 7 percent, on average, of its power through renewables, and industries are leaving Germany because of the associated increase in electricity prices.

Hansen said that seven nations, including France and China, have nuclear expertise or research and development projects into “fourth generation plants” without the current drawbacks.

However, Dr. Mark Diesendorf, author of “Greenhouse Solutions with Sustainable Energy,” is unconvinced. “On top of the perennial challenges of global poverty and injustice, the two biggest threats facing human civilization in the 21st century are climate change and nuclear war. It would be absurd to respond to one by increasing the risks of the other,” he said.

In his popular book “Sustainable Energy – Without the Hot Air,” Dr. David MacKay comprehensively discusses various energy sources, with many pragmatic conclusions based on careful calculations. MacKay, who is based at Cambridge University’s Department of Physics, is also the chief scientific adviser to the U.K.’s Department of Energy and Climate Change.

In the book’s chapter on nuclear power, MacKay looks at the waste issue and concludes: “One thousand years is certainly a long time compared with the lifetimes of governments and countries! But the volumes are so small, I feel nuclear waste is only a minor worry compared with all the other forms of waste we are inflicting on future generations.” Later, in the section on effective global energy plans, MacKay’s bottom line is: “To complete a plan that adds up, we must rely on one or more forms of solar power. Or use nuclear power. Or both.”

While MacKay’s research focuses more on meeting demand and less on economics, other experts confirm Hansen’s concern about the relatively high capital cost of renewables. Dr. Barry Brook is director of Climate Science at the University of Adelaide’s Environment Institute. In a recent co-review of nuclear issues with Martin Nicholson, author of “Energy in a Changing Climate,” Brook stated: “Renewable energy sources [such as wind and solar] use significantly more raw materials per unit of energy generated than even present-generation nuclear power stations and the full life-cycle emissions, including nuclear fuel production, are similar from both sources. When energy storage and fossil-fuel back-up are included, wind and solar emissions are much higher.”

Uranium is not the only reactor fuel under scrutiny. Research into thorium has been revived, most notably in India and Russia, with two crucial features. First, thorium reactors produce negligible weapons-grade plutonium, and second, they can “burn up” existing stocks.

However, according to the World Nuclear Association, problems involving the high cost of fuel fabrication due to contamination by uranium isotopes mean there is still a weapon proliferation risk. But Kirk Sorensen, thorium advocate and NASA engineer, explains that this unstable uranium “makes it very easy to detect and very difficult to fabricate any sort of practical weapon from it.”

Even though the thorium cycle is far cleaner, safer, more efficient, and sustainable than uranium, Sorensen believes its most compelling advantage is the lower cost of the much smaller reactors required. His visionary passion has certainly helped put thorium back in the spotlight. “A world powered by thorium safely for many tens of thousands of years is the goal of those working to realize the potential of thorium.”

Nevertheless, critics remain skeptical. Nuclear watchdog Dr. Richard Broinowski, author of “Fact or Fission? The Truth About Australia’s Nuclear Ambitions,” reiterates the fact that the thorium cycle produces “bomb-grade” uranium. He says there is a lot of propaganda about nuclear power and that fourth generation reactors are still highly theoretical and have not been realized yet. “There’s still exactly the same nuclear physics involved.”

MacKay’s suggested global energy plans to tackle climate change do include other solutions, such as a pollution tax, carbon capture and storage, and reducing consumption; but in regard to decarbonizing electricity, he said to “stop the Punch and Judy show and get building.”

As different countries examine various remedies based on demand and resource availability, it seems existing and new generation nuclear power may become at least part of the answer to the tough challenge of halting global warming, whether we agree with it or not.