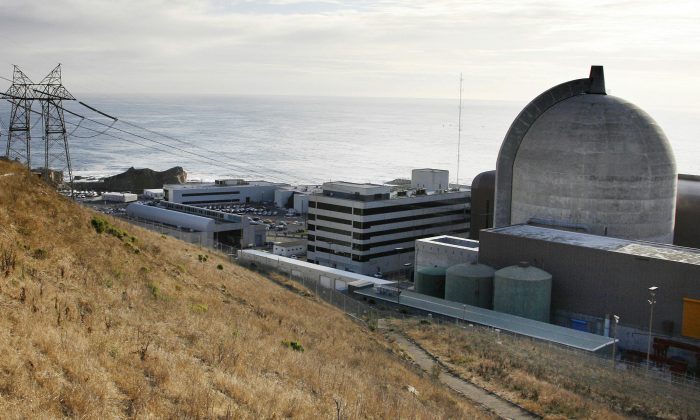 One of Pacific Gas and Electric's Diablo Canyon Power Plant's nuclear reactors in Avila Beach on California's central coast on Nov. 3, 2008. Without new operating licenses, the plant can't run past 2025. Renewing a nuclear power license is a lengthy proposition, and so even with years to go it's fast becoming a late hour. (AP Photo/Michael A. Mariant)
US

LOS ANGELES—Six years ago, the company that owns California’s last operating nuclear power plant announced it would seek an extended lifespan for its aging reactors. Pacific Gas and Electric Co. envisioned Diablo Canyon as a linchpin in the state’s green energy future, with its low-carbon electricity illuminating homes to nearly midcentury.

Now, with a much changed nuclear power landscape, the company is evaluating whether to meet a tangle of potentially costly state environmental requirements needed to obtain renewed operating licenses.

That prospect is remarkable considering it was once predicted that meeting California’s growing energy needs would require a nuclear power plant every 50 miles along its coast. But vast fields of solar panels, wind turbines that in places are as common as fence posts and developments in power storage speak to changed times.

“We are not talking about either go dark or go nuclear. There are clearly now so many alternatives,” said former California Environmental Secretary Terry Tamminen, a green energy advocate who served under Republican Gov. Arnold Schwarzenegger.

The issues in play at Diablo Canyon range from a long-running debate over the ability of structures to withstand earthquakes—one fault runs 650 yards from the reactors—to the possibility PG&E might be ordered by state regulators to spend billions to modify or replace the plant’s cooling system, which sucks up 2.5 billions of gallons of ocean water a day and has been blamed for killing fish and other marine life.

When PG&E announced its intention to keep the plant running an additional 20 years, to 2044 for the Unit 1 reactor and 2045 for Unit 2, company officials said it would help slash greenhouse gas emissions while contributing to the economic health of California, which has been setting ever-higher ambitions for using solar, wind and other renewable energy sources.

Without new operating licenses, the plant can’t run past 2025. Renewing a nuclear power license is a lengthy proposition, and so even with years to go it’s fast becoming a late hour.

The uncertainty around PG&E’s 3-decade-old plant comes at a challenging time for the company and the U.S. nuclear industry, once thought on the verge of a renaissance.

In April, PG&E was hit with a record $1.6 billion penalty for a 2010 gas pipeline explosion that killed eight people and destroyed about three dozen homes near San Francisco. The explosion led to state and federal investigations into alleged back-channel dealings between PG&E executives and a top state regulator, and suggestions the state’s largest utility should be broken up to improve safety.

Meanwhile, the construction of new nuclear plants in the South has come with costly delays, while proposals for others around the U.S. have been scratched.

An abundance of inexpensive natural gas has owners of older nuclear plants wondering if the money needed to keep them on line will pay off. Those plants—typically decades old—can make cheap power but face expensive repairs and maintenance from age. That can turn the balance sheet upside down.

Southern California Edison’s San Onofre nuclear plant, between San Diego and Los Angeles, was shut down permanently in 2013 after a $670 million equipment swap failed. The same year Duke Energy announced it would close the Crystal River Nuclear Plant in Florida after a botched repair job left it facing potentially billions of dollars in additional work.

“You put together the potential for high capital costs and political hesitation and we’re not surprised PG&E would take pause before going forward with any significant investments,” Morningstar energy analyst Travis Miller said.

For years, environmentalists have pressed the Nuclear Regulatory Commission to close Diablo, given its proximity to faults in a seismically active state. If the plant shut down it would be a blow to the local economy—it’s a major employer in its home county—but state energy experts say it would not pose long-term problems for California’s power supply, though they’ve recommended more study.

Nuclear Plants Dip Into Dismantling Funds to Pay for Waste

For PG&E to receive extended licenses from the federal government, California regulators must determine a renewal is consistent with state environmental laws. A key player in that review is the powerful California Coastal Commission, which says the company’s 2009 application is incomplete.

In a letter to the company, the commission raised the possibility seismic studies could require PG&E to modify foundations or add support structures, and that a longer operating life would require more space to store highly radioactive used fuel—potentially expensive projects that could fall under the commission’s authority.

PG&E spokesman Jones said Saturday the company submitted an updated seismic hazard re-evaluation to the NRC earlier this year demonstrating that the plant can withstand potential earthquakes. He said a further evaluation of its equipment should be completed next year.

“Based on the robust design of the plant and its significant design margin, we do not anticipate the need for any seismic-related enhancements,” he said.

He said there is also enough room at the site to safely store all fuel even if the plant operated for an additional 20 years.

Gov. Jerry Brown, a onetime nuclear power critic who has moderated his position as he’s become more ardent about the dangers of carbon emissions, has been quiet on the plant’s future.

As PG&E continues its review of state-level issues, it’s facing a new round of questions from the NRC, which is conducting its piece of the license review, and a state board about its seismic research.

PG&E has long said the plant is safe from the largest potential earthquake in the region. But new research has led to more questions about nearby faults, their shaking potential and how the company evaluates it.

Among the issues: What exactly is the plant built on?

The state Independent Peer Review Panel, an arm of the California Public Utilities Commission comprised of scientific experts, has questioned the company’s research on the physical properties and structure of rock below the plant, an important factor in how hard the earth could shake during an earthquake.

The geology is complex—a jumble of different rock types, according to the review panel. Generally, softer, looser earth can amplify shaking, sometimes significantly.

Rather than solid rock, in some places “it looks like a Christmas fruitcake,” said Bruce Gibson, a geophysicist and San Luis Obispo County supervisor who serves on the panel. “It’s a big deal.”