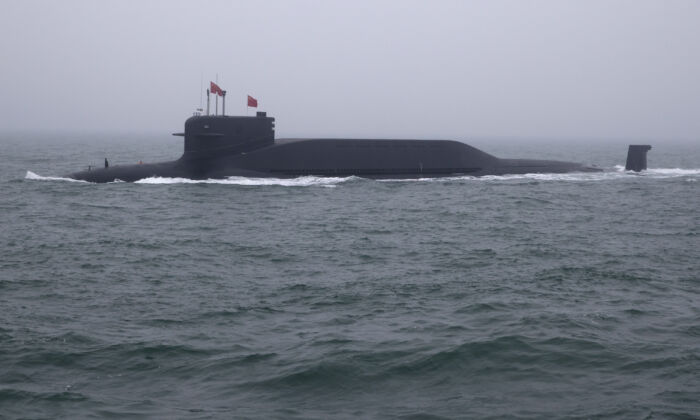 A type 094 Jin-class nuclear submarine Long March 15 of Chinese Navy participates in a naval parade in the sea near Qingdao, in eastern China's Shandong Province on April 23, 2019. (Mark Schiefelnein/AFP via Getty Images)
Viewpoints

Nuclear Arms Are Now Musts for Taiwan and Japan

To counter Beijing’s growing belligerence in the South China Sea, Australia last week changed course: It canceled an order with France for conventional submarines that it feared were no longer adequate to protect its national interests, and entered into an alliance with the United States and the UK that involves acquiring a fleet of nuclear-powered submarines.

Taiwan and Japan, which have no lesser concerns about China’s intentions, should now join Australia in protecting their national interests by acquiring the one deterrent likely to assure their safety: nuclear weapons. In the past, they couldn’t do so because of opposition from the U.S. government, which promised them protection, because the rest of the Western world would also have objected to seeing its dream of denuclearization recede, and because many of Taiwan’s and Japan’s own citizens opposed nuclearization. Those reasons to stand down no longer carry much clout, not after America’s debacle in Afghanistan.

“The Americans have lost the prestige of a global leader,” said Czech President Milos Zeman of America’s withdrawal under President Joe Biden, characterizing it as “cowardice.” Armin Laschet, who many expect will succeed Angela Merkel as Germany’s chancellor, called the Afghanistan withdrawal “the greatest debacle NATO has suffered since its founding.” Carl Bildt, Sweden’s former prime minister, said, “There was a time when the U.S. talked about upholding the global order but that is not the language now coming out of the White House.” Others, like Nathalie Loiseau, France’s former Europe minister, echoed that view by saying, “Some other countries, such as the UK and Germany, always thought they could rely mostly on the U.S. for security,” adding that “times have changed.”

The disgust voiced by America’s allies is shared widely by many within the United States, who note with dismay that America under President Jimmy Carter abandoned the Shah of Iran in the 1979 Iranian Revolution and under President Barack Obama abandoned Egyptian President Hosni Mubarak in the 2011 Arab Spring. With the widespread view among America’s friends that America’s leaders can no longer be counted on to defend its allies, any opposition from them to Taiwan and Japan completing their long-frustrated nuclear weapons programs would be feeble at best. Claims from the doves within Taiwan and Japan that America can still be counted on to come to their defense would also ring hollow.

More importantly, Beijing itself may believe it now has a free hand in expanding its domain. The editor-in-chief of Global Times, a mouthpiece of the Chinese Communist Party, posted on Twitter: “After the fall of the Kabul regime, the Taiwan authorities must be trembling. Don’t look forward to the US to protect them. Taipei officials need to quietly mail-order a Five-Star Red Flag from the Chinese mainland. It will be useful one day when they surrender to the PLA.”

To curb Chinese enthusiasm at America’s apparent lack of resolve, Taiwan and Japan need to join the many other nations that are now nuclear states. In Taiwan’s case, that would not take long, according to a report by the Australian Strategic Policy Institute. “Taiwan is already a latent nuclear power,” it states, despite the U.S.-forced shutdown of its weapons program in the 1970s. Taiwan’s military carried on secretly until the late 1980s, successfully achieving a nuclear reaction and coming within a year or two of acquiring a bomb when a CIA spy exposed the program, leading to its halt.

Japan is believed to be even closer to having a bomb, having assembled the technology and the plutonium needed to place it a “screwdriver’s turn” from completion. Although public opinion in Japan, the only country to have suffered a nuclear attack, fears provoking China, and to date has overwhelmingly preferred to be protected by America’s nuclear umbrella. But public opinion may change given China’s ever-increasing territorial demands and questions over the value of the umbrella. Understandably, Japan’s leaders have kept their options open by securing enough weapons-grade fuel for 5,000 bombs.

Would nuclear weapons in the hands of China’s neighbors lead to increased Chinese belligerence, as Beijing has repeatedly threatened? The Chinese regime’s belligerence can hardly become more extreme. “We will use nuclear bombs first. We will use nuclear bombs continuously. We will do this until Japan declares unconditional surrender for the second time,” warned a Chinese video recently of the consequences to Japan if it upholds its obligations and comes to Taiwan’s defense. “When we liberate Taiwan, if Japan dares to intervene by force—even if it only deploys one soldier, one plane or one ship—we will not only return fire but also wage full-scale war against Japan itself,” the video said.

Beijing’s bluster notwithstanding, the Australian Strategic Policy Institute believes empowering China’s rivals would have a sobering effect. “The use of nuclear weapons by a nuclear-armed Taiwan would certainly make an already difficult invasion for [Chinese leader] Xi and the PLA [People’s Liberation Army] more costly. History suggests that once Taiwan has nuclear weapons, the PRC [People’s Republic of China] will become much less aggressive toward it.”

President Biden recently gave his blessing to Israel’s surreptitiously built nuclear arsenal, agreeing to wink at its existence. He would likely wink at Taiwan and Japan secretly completing their nuclear programs. China would blink and be forced to be more restrained.