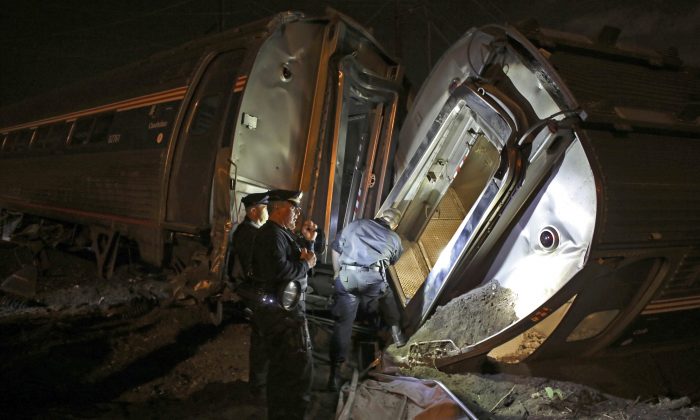 Emergency personnel work the scene of a train wreck in Philadelphia. (AP Photo/Joseph Kaczmarek)
US

WASHINGTON — The engineer in last month’s fatal Amtrak crash wasn’t using his cellphone to talk, text or download anything just before the train sped off the tracks, investigators said Wednesday, addressing one big question about what might have caused the accident but only deepening the mystery of what did.

Eight people were killed and about 200 were injured in the crash in Philadelphia. For reasons still unknown, the train accelerated to 106 miles per hour in the minute before it entered a curve where the speed limit is 50, investigators have said previously. In the last few seconds the brakes were applied with maximum force, but the train was still traveling at over 100 mph when it left the tracks.

In its updated report Wednesday, the National Transportation Safety Board said an examination of the cellphone of the engineer, Brandon Bostian, also indicated he didn’t access the train’s Wi-Fi system while he was operating the locomotive.

Bostian suffered a head injury in the May 12 crash, and his attorney has said he doesn’t remember anything after the train pulled out of Philadelphia’s 30th Street Station, the last stop before the derailment.

Bostian provided investigators with his passcode to the phone, allowing them access to the data, the NTSB said.

While investigators have ruled out the most obvious uses of the phone before the crash, they have not eliminated some others such as the use of an app, NTSB board member Bella Dinh-Zarr said at a Senate Commerce Committee hearing on train safety Wednesday. The agency says that to determine whether the phone was powered off, investigators in its laboratory have been examining its operating system, which contains more than 400,000 files of metadata.

Investigators are also obtaining a phone identical to the engineer’s and will be running additional tests to validate the data. Bostian’s phone was used to make calls and send text messages the day of the accident, but inconsistencies in phone records presented difficulties, NTSB Chairman Chris Hart told Congress last week. The voice and text messages were recorded in different time zones and may not have been calibrated to the times of other equipment on the train, such as a camera focused on the tracks and a recorder that registers how fast the train was moving and actions by the engineer, he said.

Accident investigators have said previously that they have not found any mechanical problems with the train. The track had been inspected not long before the crash.

On Tuesday, the House passed a transportation spending bill that includes $9 million for Amtrak to install inward-facing cameras in locomotive cabs. Five years ago, the NTSB recommended that the Federal Railroad Administration require railroads install the cameras so investigators would have a video and sound recording of what was going inside the cab in the event of an accident.

Regulators convened an industry-labor advisory committee to work on possible regulations last year. But the committee has been unable to reach a consensus, and the railroad administration has said it will pursue regulations without the committee’s endorsement. However, it could be years before regulations are proposed and then made final.

Rather than waiting for regulations, Amtrak will install the cameras on trains in the Northeast Corridor on its own, the railroad’s president and CEO, Joseph Boardman, said recently.

The NTSB recommendation on cameras was made as the board wrapped up an investigation into the Sept. 12, 2008 head-on collision between a Metrolink commuter train and a Union Pacific freight train in Chatsworth, California. The Metrolink train ran through a red signal. Twenty-five people were killed and scores injured. The NTSB faulted the Metrolink train’s engineer for the collision, saying that he was distracted by text messages he was sending while on duty. However, that was a deduction because investigators didn’t have a complete record of the engineer’s actions that a camera would have provided.

At Wednesday’s hearing, Dinh-Zarr also urged the swift installation by railroads of positive train control, a technology that can prevent trains from derailing because of excessive speed, as well as collisions between trains. NTSB first recommended trains have the technology in 1970, and has since investigated 140 accidents that it could have prevented, she said.

Congress mandated in 2008 that Amtrak, commuter railroads and freight railroads install positive train control by the end of this year. Amtrak still has to do extensive testing of the system but will meet the deadline in the busy Northeast Corridor between Boston and Washington, officials have said.

Most railroads, however, will not make the deadline. Robert Lauby, the railroad administration’s associate administrator for safety, said 29 percent of commuter railroads will make the deadline and about half of the rest estimate they will be ready by 2018. But the nation’s largest freight railroads don’t expect to be ready until the end of 2020, he said.