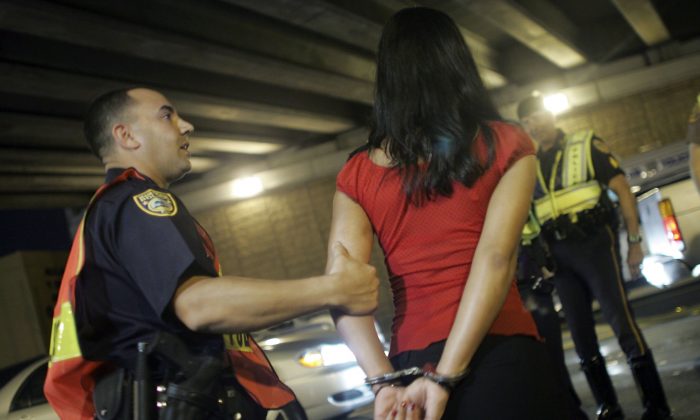 Officer Kevin Millan from the City of Miami Beach police department arrests a woman after she failed a field sobriety test at a DUI checkpoint in 2006. Investigators found a pattern of excessive force among Miami police. (Joe Raedle/Getty Images)
US

NTSB Drunk Driving Limit: Should the Limit be Lowered?

NTSB drunk driving limit: The National Transportation Safety Board voted to issue “bold recommendations” to the government, focusing on ways to crack down on drunk driving.

Among the recommendations are reducing the blood alcohol content ceiling in states from 0.08 to 0.05.

“The research clearly shows that drivers with a BAC above 0.05 are impaired and at a significantly greater risk of being involved in a crash where someone is killed or injured,” said the board’s chairwoman, Deborah Hersman, in a statement.

She pointed to the statistic that over 100 countries on six continents have BAC limits of 0.05 or lower. A woman weighing less than 120 pounds can reach .05 after just one drink. A man weighing up to 160 pounds reaches .05 after two drinks.

The board also recommends requiring ignition interlocks for all offenders and targeting repeat offenders.

Drunk driving should be addressed because despite a mindset that the problem has been solved it is still killing one person every hour, on average, according to the board’s chairwoman, Deborah Hersman.

“Most Americans think that we’ve solved the problem of impaired driving, but in fact, it’s still a national epidemic,” she said.

Reducing the blood alcohol limit below .08 could save over 7,000 lives a year, the Insurance Institute for Highway Safety has estimated.

Australia saw a 12 percent decline in alcohol-related deaths as a share of overall traffic fatalities when it lowered its legal limit to .05. The limit in most of Europe is also .05, and in some countries it’s as low as .02.