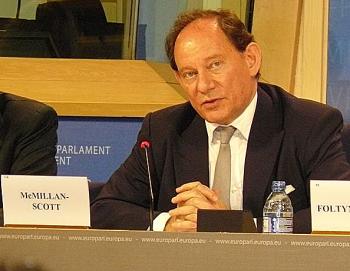 Member of the European Parliament Edward McMillan-Scott and other EP members, discuss NTDTV, the CCP, and the Olympics. (The Epoch Times)
International

On July 15 New Tang Dynasty Television, with support of the International Federation of Journalists and Reporters Without Borders, organized a press conference in the European Parliament in Brussels to strongly urge Eutelsat to immediately restore NTDTV’s signal on the W5 satellite to Asia.

The Belgian NTDTV representative in the panel stated that for several weeks Eutelsat’s only explanation has been that there is technical problem, a so-called ‘power anomaly’. Recently however, a recording of a phone conversation provided by Reporters Without Borders proved that this is not the case and that Eutelsat could turn on NTDTV’s signal at any time.

“We at NTDTV are shocked and outraged to learn that a recorded conversation by a Eutelsat employee shows the ‘power anomaly’ – which Eutelsat has claimed caused the unavoidable shutdown of our satellite broadcasts to China – really “was a premeditated, politically-motivated decision violating the free flow of information and the convention under which Eutelsat operates”, he said.

“With the Beijing Olympics mere weeks away, the Chinese people’s need for uncensored news has never been greater. Yet at this critical juncture, the decision of the CEO of Eutelsat—Mr. Berretta—closed the only window of free information to millions of Chinese people. What the Chinese regime has not been able to accomplish for years – although they have been trying very hard—Mr. Berretta has delivered by the flip of a switch.”

Helga Truepel from the Group of the Greens took a strong stance, stating that “the French presidency of the European Union should put more pressure on Eutelsat”. “We see now that the promises made by the Chinese regime in 2001 to the IOC were false promises. The situation, including the media freedom, is getting worse. Therefore French president Sarkozy should not attend the opening ceremony of the Olympics”, she added.

According to the NTDTV representative it should be made clear NTDTV has a contract with Eutelsat, and did not violate any of the clauses of the contract. “Therefore Eutelsat has a clear moral and legal obligation to restore NTDTV’s signal immediately.”

He pointed out, "This is an urgent matter of highest importance to NTDTV and to our viewers who depend on us for uncensored news and information in Mainland China”. Therefore NTDTV is campaigning to raise wide support from the public. Since last week, we have collected over 50 signatures from members of the European Parliament to co-sign a petition letter to the CEO of Eutelsat.”

Edward McMillan-Scott referred to the Olympics and stated that since European Commission Chairman, Barosso, and European Commissioner for External Relations, Ferero-Waldner, have decided not to attend the Olympics, Europe should not use double standards and French President Sarkozy should also stay home. “We have to take politics out of sport, and sport out of politics”, he stated.

The NTDTV representative ended with reading one of the many audience feedbacks received from mainland China after NTDTV’s signal was abruptly shutdown by Eutelsat: ‘My families and friends in China asked me to help them to express their concern and anxiousness to see NTDTV back as soon as possible. Chinese people under suffocation look to NTDTV to bring them the only ray of free information and hope in life. Please do not let the only light in the darkness disappear…”