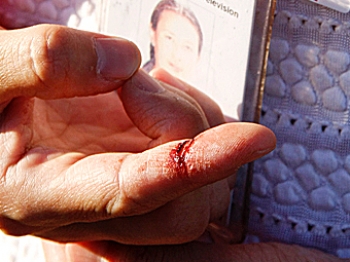 NTD reporter Zhu Jiang was attacked by a Fukien American Association organizer, who slashed her finger and stole her camera. (Dai Bin/The Epoch Times)
US

During the August 1 press conference at the Fukien American Association (FAA) on East Broadway in New York City, several organizers physically attacked Ms. Zhu, grabbing her reporter ID and TV camera along with the videotape inside of it.

Ms. Zhu said when she arrived at the event where there were a number of Chinese media, a young man came up and asked her which station she was from; she answered and he left. Soon after Ms. Zhu began filming, an event organizer approached her and told her to stop filming and leave. When Ms. Zhu asked whether or not it was a public event, instead of receiving an answer, she was attacked.

“Several men from the press conference… surrounded me and tried to push me out the door. One of them tried to grab my reporter ID … One man tried to turn my TV camera off. These men shouted while attacking me and pushing me out. Afterwards, I found my videotape was missing,” recalled Ms. Zhu.

Ms. Zhu did not leave; instead, she waited outside of the conference room. A short time later, Ms Zhu noticed one of her attackers leaving the room with some other people, so she attempted to photograph the perpetrator. Another man then ran at her and grabbed the camera from around her neck, leaving Ms. Zhu with a slashed and bloody finger.

Ms. Zhu immediately called the police as well as colleagues and friends to help report the incident. The attackers, meanwhile, fled the building.

According to Ms. Zhu, while she was waiting for the police to arrive at the crime scene, an unidentified man who was standing with Deputy President of FAA Mr. Zhen Qi, repeatedly tried to intimidate her by claiming that he could have NYPD arrest her. Ms. Zhu said he was wearing a shirt with some sort of NYPD insignia printed on it.

One of the organizers had reportedly told Ms. Jiang that the press conference was hosted by Con Edison. But when a reporter called Con Edison, David Gamach, Consolidated Edison's Director of Manhattan Public Affairs, told her that there was no such press conference on that day.

"ConEdison did not have a press conference on August 1," said Gamuch. " Whatever incident occurred or whoever held the press conference, ConEdison had absolutely no involvement in it whatsoever."

“At the time,” the interview continued, “there were few organizations such as this in the United States … there was no diplomacy between the U.S. and China, so we hung the PRC’s Red Flag secretly. At the time, we ran the risk of jail time to hang the Red Flag. The overseas Chinese people during that generation had to secretly hang the Red Flag and dared not conduct activities openly.”

Chen admitted openly during the interview, “It is very touching to see PRC’s National Day celebration every year. The entire Fukien community in New York’s Chinatown will hang the Red Flag. People used to say this is a ‘liberated area.’” A liberated area refers to an area seized by the Communist Party.