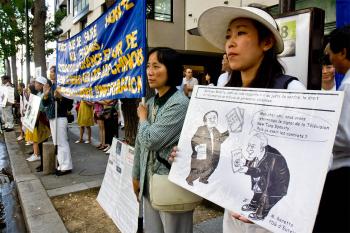 Protesters outside the HQ of Eutelsat in Paris demonstrated against the end of the uncensored NTDTV news broadcast into China on the eve of the Olympics. (Jan Jekielek/The Epoch Times)
International

Turning up the Heat on Eutelsat

Cindy Drukier
Cindy Drukier is a veteran journalist, editor, and producer. She's the host of NTD's The Nation Speaks featured on EpochTV.
View profile
Follow
biggersmaller
Print
PARIS—With two days to go before the start of the Olympic Summer Games, Eutelsat was feeling the heat to restore New Tang Dynasty TV to the Chinese airwaves so that people in the mainland will once again have access to uncensored news broadcast.

This was the very clear message delivered to Eutelsat at a press conference held on Wednesday, August 6th in front of the satellite company’s Paris headquarters.

“Today, Eutelsat has only one means to retain its credibility: returning to the Chinese people access to free, independent information, meaning immediately resuming the NTDTV transmission over Asia on the W5 satellite,” said Polish European Parliamentarian Konrad Szymanski in a message sent to the event.

On June 16th, Eutelsat’s CEO Giuliano Barretta gave orders to shut down the transponders that carried NTDTV signal on the W5 satellite.Eutelsat claimed this was necessary due to a power anomaly with the satellite but since then the company has given no indication of working to solve the problem nor to move NTDTV to alternate transponders that became available on July 31st, as they are contractually obliged to do.

In an open letter to President Nicolas Sarkozy that was read to the crowd of over 100 NTDTV supporters, French National Assembly member, Francois Hostalier informed him that many French and European parliament members have been moved by Eutelsat’s decision to cut off NTDTV.

“Do we have to reiterate that NTDTV is registered with CSA [the French broadcasting regulatory body] and that NTDTV isn't contrary to the values promoted by any media broadcasted in the civilized world,” wrote Hostalier.

To date, 183 members of the French National Assembly members and 75 representatives from the European Parliament, 25 of whom are French, have written in support of NTDTV.

Joe Wang, president of NTDTV Canada, travelled to Eutelsat’s headquarters in Paris this week to stress that Eutelsat had the chance of bringing a ray of hope to Chinese people in the mainland.

“It is not acceptable for a media company in the free world to assist the CCP to suppress its own people,” he said.

Reporters Without Borders director of Asia-Pacific region, Vincent Brossel, highlighted that NTDTV is cut off from its natural audience in China, which is “still imprisoned by state censorship”.