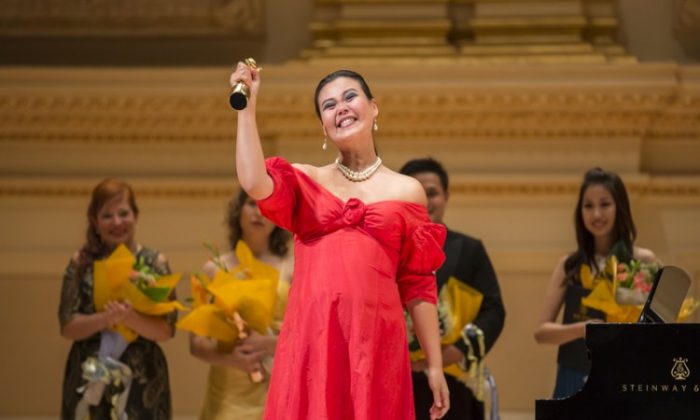 Mario Zhang from Canada and Iaia Hanying Tso from Taiwan grabbed the gold prizes, winning $10,000 each. They emerged from 30 contestants selected in two preliminary rounds held in New York and Taiwan.

Originally from China, Mario Zhang has performed in operatic productions and concerts all around the world. He graduated at the London Royal College of Music and won the First Prize at the National Clonter Opera Competition in London. He was also a finalist at the Placido Domingo International Opera Competition and the Metropolitan Opera Competition.

Iaia Hanying Tso graduated from the Luigi Cherubini Conservatory in Italy, and won second place at the Concorso Internazionale in 2010.

The International Vocal Competition is part of NTD’s series of cultural events to revive traditional Chinese culture, and as such, each finalist was asked to sing a Chinese song in bel canto style along with their own selection of opera pieces.

This year marks the 6th anniversary of the vocal competition, with the aim of promoting traditional vocal arts of pure authenticity, pure goodness, and pure beauty, according to NTD’s official website.

“This year’s competition drew contestants from many ethnicities and countries, and that is very heartening to see. NTD did a great thing. I could feel the excitement from the audience. I can see the impact of this competition growing over the years to come,” said Mario Zhang, one of the gold winners.

This year, NTD partnered with Sicily Opera Academy (SOA, Italy) which will provide one selected contestant with four days of study and performance sponsored by the school. The lucky winner of this scholarship was Jamila Sockwell from the United States.

The two-hour concert after the final round on Oct. 21 was a once-in-a-lifetime experience for the contestants: they concluded the performance on stage with Marcello Giordani, singing the drinking song from “La Traviata.”