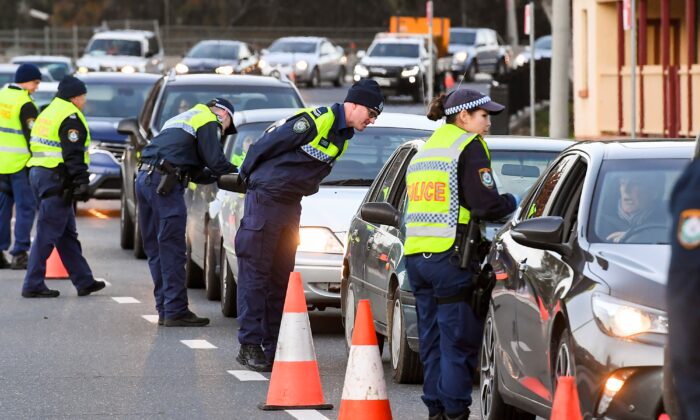 NSW-Victoria Border Restrictions to Be Eased

Travel restrictions for residents on the NSW-Victoria border could soon be eased, with the NSW government considering extending the travel zone to give more freedom to border communities.

Deputy Premier John Barilaro said the coalition government would look to extend the border zone from 2.5 to 50 kilometres over the next 10 days.

He said this would give more freedom to those on both sides of the border to work and function as a community.

“Further changes we are working towards include allowing the agriculture workforce to travel across the border, initially within a 100 kilometre radius, and creating quarantine areas closer to the border,” Barilaro tweeted on Aug. 25.

It comes as the Premier Gladys Berejiklian backed the state’s hotel quarantine system despite a virus-positive security guard being fined twice for failing to isolate while waiting for his test results.

Berejiklian says the process is monitored by police daily and audited regularly, but notes no system is foolproof.

“The latest advice I have received from the police and our authorities is that the system we have should remain and is sound,” she told reporters on Aug. 25.

“If there are any systemic issues then, of course, we will deal with them.”

The 22-year-old security guard was fined $2000 for visiting Westfield Burwood after his test on Aug. 20 and Burwood’s Service NSW building on Aug. 21 afternoon.

The Campsie man was on Aug. 22 confirmed as the second Marriott hotel security guard to catch the virus, and was fined on Aug. 23.

It comes as police began relocating 366 guests from the Travelodge Hotel Sydney after it was found not to be meeting the expectations of the quarantine program.

Hotels in the quarantine program must have robust infection control measures with personal protective equipment to be properly used by staff, including security guards and police.

The relocation operation started on Aug. 25 afternoon and was expected to take about 12 hours to complete.

The premier noted NSW had borne the brunt of Australians returning home and entering hotel quarantine with some 50,000 returned travellers going through the system so far.

“We are doing this on behalf of the nation because other states are frankly not upping how many people they are accepting every day,” Berejiklian said.

It comes as NSW recorded three new cases in the 24 hours to 8 p.m. on Aug. 24, including one returned traveller in hotel quarantine and two close contacts of previously known cases.

One of those is a healthcare worker at Liverpool Hospital and the other is a student from Our Lady of Mercy College in Parramatta. Both have been in self-isolation during their infectious periods.

Berejiklian says the high numbers of people coming forward for testing has helped the state move into a stronger position to control the virus’ spread.

However, she says pandemics are unpredictable and challenging, warning that NSW is not out of the woods yet.
“Every day is a battle against the disease. No day is easy,” she said.

“One of the best decisions I made was putting police in charge of the operations of the entire response to the pandemic from day one to allow our health experts to do what they are brilliant at and that is deal with the disease itself.”