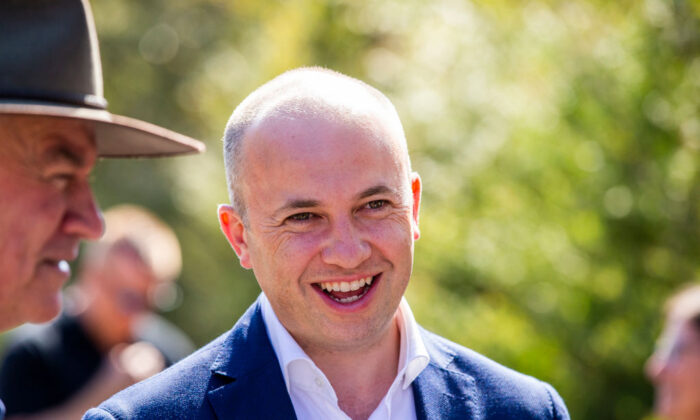 Matt Kean, NSW Minister for Energy and Environment ahead of the opening of the national trail walk at the Royal National Park in Bundeena, New South Wales, Australia on Sep. 14, 2019. (Jenny Evans/Getty Images)
Australia

“What we have got to do is get back to talking about the issues that matter to people across NSW,” he told ABC TV on Wednesday.

“Because it’s not about us, it’s about the people of NSW.

The NSW Treasurer was elevated to deputy leader at a party room meeting on Tuesday, replacing Stuart Ayres, who bowed to pressure to resign last week over his role in the controversial appointment of former deputy premier John Barilaro to a lucrative U.S. trade job.

Ayres decided to quit just days after former fair trading minister Eleni Petinos was forced from the cabinet over alleged bullying in her office.

Labor is now asking questions about Petinos’ attendance at meetings with a property group linked to Barilaro, revealed in ministerial diaries published on Monday night.

Questions remain about how Barilaro got the U.S. trade commissioner job after he appeared before a parliamentary inquiry on Monday and is scheduled to return on Friday to be grilled again.

Kean is trying to shift the spotlight onto policies he announced as treasurer in the June budget, which has been largely overshadowed by the “jobs for the boys” crisis which has dominated headlines since.

He bemoaned the recent bout of “distractions about internal party matters”.

“We’re in politics to make a difference to real people, to improve their lives, to grow our economy and to make NSW a stronger place,” he said.

“That’s certainly what I’m going to be focused on as treasurer, as the deputy leader – supporting the premier, who has a laser-like focus on those issues every day of the week.”