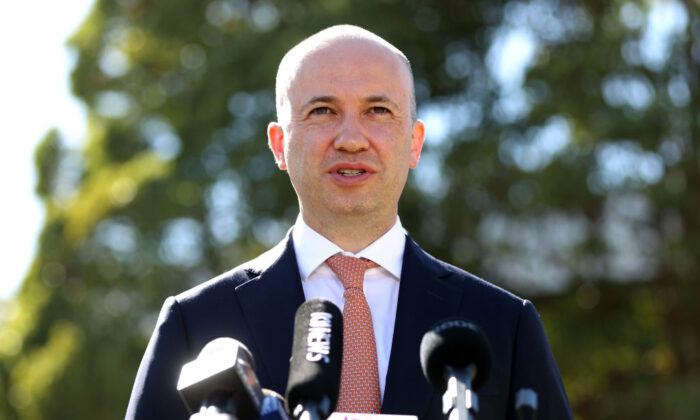 Government whip Nathaniel Smith announced on Tuesday Kean would take up the role.

“With only one candidate stood for election, our new deputy leader … was elected unopposed,” Smith said.

The position became vacant after Stuart Ayres resigned from the ministry last week over his involvement in the appointment of former deputy premier John Barilaro to a controversial overseas trade role.

NSW parliament resumes on Tuesday with an embattled minority government attempting to stop a series of scandals from running all the way to the March election.

The choice of a new deputy leader was effectively made for the Liberals on Monday.

The only other Liberal to put their hand up, Transport Minister David Elliott, put it back down hours after Mr Kean confirmed he would also run.

As parliament resumes, Ayres and former fair trading minister Eleni Petinos will both shift to the back benches.

Ayres spent more than eight years as a minister, while Petinos faces an easier adjustment after less than eight months in cabinet.

After defending Petinos as bullying allegations emerged from her office, Leader Dominic Perrottet booted the minister following further information about her conduct.

He could face questions over the specifics of that information from opposition and crossbench spoilt for choice on which scandals to pursue.

Perrottet became premier in October after Gladys Berejiklian stepped down amid a corruption investigation, which is yet to be resolved.

Former deputy premier John Barilaro’s separate but near-simultaneous resignation has presented problems after he was appointed as a senior trade and investment commissioner to the Americas.

He resigned from the role within two weeks of his appointment becoming public in June, noting it had become “untenable”.

But questions persist on how he won the position, with a committee inquiry into the appointment hearing from Barilaro on Monday.

He said the inquiry failed to produce any evidence he had done anything wrong, but he regretted ever applying for the job.

The inquiry is separate to a Department of Premier and Cabinet review of the appointment, a draft of which prompted Ayres’ resignation after it identified he might have interfered in the hiring process.

Labor is seeking to expand the scope of the inquiry to other overseas trade and investment postings, which it has promised to abolish if it wins the election in March.

The government is also facing dual inquiries into the response to the devastating flooding that hit the state earlier this year.

The premier has received a report from former NSW chief scientist Mary O’Kane and former police commissioner Mick Fuller, but is yet to release it as promised.

The final report from a parliamentary committee’s separate inquiry into the state’s flood response will be tabled on Tuesday.

The coalition has ruled NSW since a landslide 2011 election victory, but its third term is nearing its end in a minority government after the Liberals ejected two members.

The premier said in July he would seek to suspend Sidoti from parliament after he refused to resign over a corrupt conduct finding he has vowed to fight.