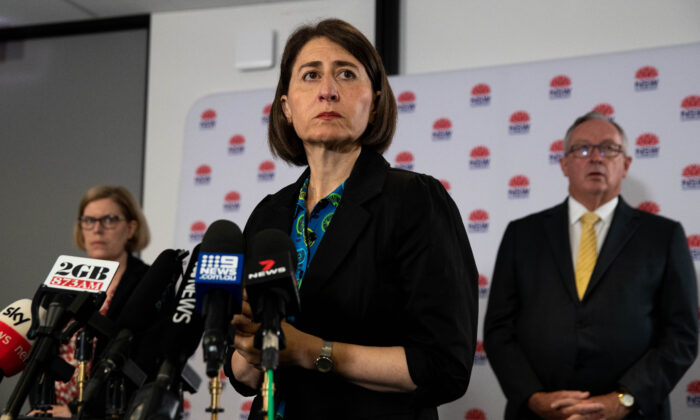 New Years Eve restrictions in Sydney have been tightened after NSW reported 18 cases of community transmission of coronavirus and a second cluster of the deadly disease in the inner west.

The so-called Avalon cluster on Sydney’s northern beaches, which erupted earlier this month, generated another nine case in the 24 hours to 8pm on December 29.

Eight of the nine people are already in isolation for their full 14-day infectious period.

The total cases in the hot spot now stand at 138 identified from 17,267 tests and Premier Gladys Berejiklian is urging more people to get tested.

Another group of six infected persons – dubbed by health experts as the Croydon cluster – was also revealed on December 30.

It includes three adults and three children from the same extended family, who gathered for several events over a number of days.

The six are from three different households and some live outside the Croydon area.

So far authorities can find no link to the Avalon cluster.

“The Croydon cluster is concerning because there’s no established link all the other cases there is some crossover with venues or regions that we’ve identified as a concern,” Premier Gladys Berejiklian said on Wednesday.

“We anticipate that because of the nature of that extended family’s movements, there will be more cases from that cluster.”

Due to the “proliferation of cases” outside the northern beaches overnight, tighter restrictions for New Years Eve and beyond will be enforced, the premier said.

From midnight on Wednesday household gatherings in Greater Sydney – which includes Wollongong, the Central Coast, Nepean and the Blue Mountains area – will be limited to five people inside, down from 10, and 30 outdoors, down 50.

On the northern beaches, gatherings of five people will be permitted.

Meanwhile, authorities are still investigating three other COVID-19 cases involving two people from the same household in Wollongong on the state’s south coast and another in northern Sydney.

The Wollongong pair a woman in her 50s and a woman in her 20s. The older woman had travelled to Sydney between the 15th and 17th of this month and had been at venues in the CDB, sparking a new alert for a restaurant at the Sydney Opera House for those dates.

The Wollongong issue has sparked close-contact health alerts for two Greek Orthodox churches in the city dating back to December 27 – St Nektarios Church and The Holy Cross Church.

Residents have been lining up in large numbers outside Wollongong Hospital to be tested since Tuesday, while new public health alerts have been issued for Buckley’s Sydney near the Opera House and Lady Macquarie’s Chair open-air screening of Prom.

Elsewhere, an additional nine infringement fines $1000 have been handed to guests of the Pyrmont wedding after attendees broke a lockdown governing northern beaches residents.

Police Minister David Elliot said the 21 breaches so far relating to the incident was a terrible example of people defying health orders.

Sydneysiders have been asked to demonstrate “personal responsibility” and stay COVID-safe over the New Year.

Residents are mostly banned from watching the famous New Year’s Eve fireworks from the harbour on Thursday after the foreshore was shut for the first time.

The usual 9pm fireworks display has been cancelled and people are being urged to stay at home and watch the shortened seven-minute show at midnight on television.

Restricted areas will be set up around The Rocks and Circular Quay will have no direct public transport routes from 5pm on Thursday evening.

To avoid “super spreading events” the five-person rule will remain in place beyond New Year’s Eve until all strains of transmission have been identified.

Stay-at-home orders applying to northern beaches residents north of the Narrabeen Bridge will continue until at least January 9. A lockdown for the peninsula’s southern zone will be in place until January 2.