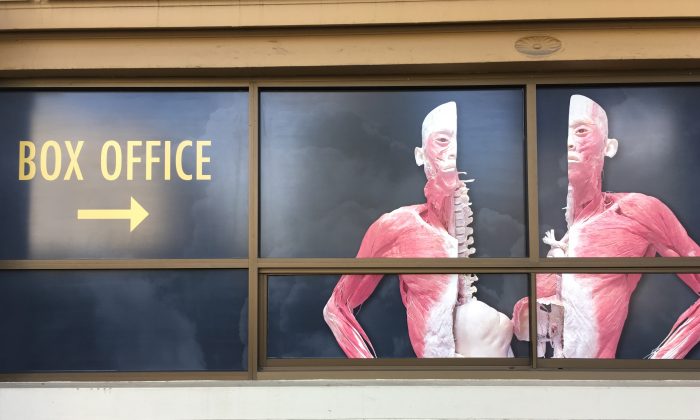 Calls to end a controversial exhibition of real human bodies in Sydney is gaining momentum after one of Australia’s specialist medical training organisations, the Royal Australasian College of Physicians (RACP), found that the New South Wales Health Department may have breached its own policies when it approved the exhibition.

The ‘Real Bodies’ exhibition, which displays 20 real plastinated human corpses and 200 plastinated body parts, has continued to attract public outcry over ongoing ethical concerns that the remains may be those of unwilling Chinese citizens. Plastination is the process of skinning human bodies and injecting liquid silicone into the flesh in order to preserve it.

In a recent statement, the RACP—a professional body representing 24,500 doctors and trainees—called on state and federal ministers to ban the exhibition because the organiser, Imagine Exhibitions, could not provide consent documents and identification papers to confirm the origin of the bodies.

RACP said in a letter addressed to NSW ministers that the bodies did not have identification and donor consent papers, breaching the health department’s own standards.

“[NSW Health] states that bodies or human tissues sourced from international institutions must meet ‘the consent and other provisions of the NSW Anatomy Act 1977 and the relevant policy requirements outlined in Conduct of Anatomical Examinations and Anatomy Licensing in NSW’ including publicly displaying donor consent forms,” the medical body’s letter said, reported Fairfax.

According to the Anatomy Act 1977, in the state of NSW, donors or their next of kin are required to provide written consent to allow for the “anatomical examination” of bodies after death.

NSW Health’s procedural document also confirms that consent and authorisation are needed from a donor for any procedure that would permanently retain human tissue.

The Anatomy Act also prescribes that the consent forms contain an option for a potential donor to authorise the use of their body or tissue for public display, such as in anatomy museums.

Tom Zaller, president of Imagine Exhibitions, previously told Newscorp that his company had “no documentation” to confirm the identities or consent of the individuals on display, leading to intense public criticism.

Many lawyers, academics, and human rights campaigners have claimed that the bodies are sourced from political prisoners and prisoners of conscience of the Chinese Communist Party (CCP).

Dr. Sophia Bryskine from Doctors Against Forced Organ Harvesting (DAFOH) said, “We believe China’s unethical transplantation industry is sourcing bodies for plastination and should be scrutinized by the international community,” referring to the admitted practice of forced organ harvesting from live bodies by the Chinese state.

“Falun Gong practitioners have been singled out as the most likely victims,” Bryskine told Newscorp.

The bodies on display are not recent corpses but bodies that were processed in China between 2000 and 2004, according to  Zaller, reported TimeOut Sydney. This was around the time when the persecution of Falun Gong practitioners was at its peak, and before any Chinese regulations were introduced to make it more difficult to import or export plastinated bodies.

Zaller previously denied claims that the bodies were unethically sourced, saying that they were “unclaimed” bodies supplied by his business partner Dr. Sui Hongjin from Dalian, China. Sui is the director of the department of anatomy at Dalian Medical University and general manager of Dalian Hoffen Bio-Technique Co. Ltd.

In response to RACP’s letter, NSW Health said that the Anatomy Act did not apply to the exhibition as it only dealt “with the anatomical examination of human deceased bodies.”

Zaller told Fairfax that his exhibition was approved by the relevant federal and state authorities. He said NSW Health did not raise any concerns or inform him that donor consent forms were required.

“There are legislation, regulations, and policies that apply to the movement of cells, tissues, body parts, and bodies across borders,” he said, reported Fairfax.

“In any case, what is troubling here is not simply the laws that surround these types of activities but the ethics of doing so and on this the state and Commonwealth governments are silent.”

NSW Greens MLC David Shoebridge, who has been outspoken about the ethical concerns regarding the exhibition, expressed his concern at a rally outside the venue on April 18 just days after the exhibition opened to the public. He has also called for the exhibition to be closed.

“We all believe in the dignity of human beings, and treating people with dignity and respect both in life and in death.

“This exhibition grossly breaches that principle … grossly indignifies people who cannot prove … [that they] gave their pre-informed consent to this,” Shoebridge said.

Similar exhibits showing plastinated human bodies have been barred in France, Israel, the United States, and most recently in Prague, reported the New York Times. The Czech Republic has also amended its laws to prevent any future body exhibits from proceeding without proper consent from the deceased or their family.