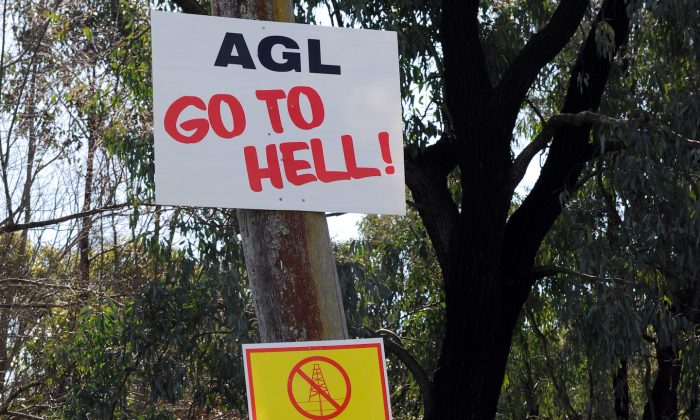 Anti-mining signs adorn a pole beside the main road through Broke, in the Hunter Valley. The NSW Government has introduced reforms to protect 5.3 million hectares of farmland and residential areas from coal seam gas mining. (Torsten Blackwood/AFP/Getty Images)
Australia

In a joint statement on Jan 28, Deputy Premier Andrew Stoner, Minister for Planning and Infrastructure Brad Hazzard and Minister for Resources and Energy Anthony Roberts said the reforms struck the right balance for communities and industry, with safeguards in place for approximately 5.3 million hectares of the state’s homes and high quality farmland.

“Today marks a significant milestone in this government’s commitment to balance the energy needs of the state and the need to support our vital agricultural industry,” Mr Stoner said in the statement.

Mr Stoner said that an additional 2.8 million hectares of valuable farming land was safeguarded by ensuring the impacts on land and water from resource proposals were considered upfront through an independent scientific Gateway process. In addition, protection for “critical industry clusters” including 60,000 hectares of vineyards and horse studs in the Upper Hunter region was announced

Not everyone was happy with the reforms. The Australian Petroleum Production and Exploration Association (APPEA) said the government had further dented the credibility of its pursuit of science-based energy policy with its announced restrictions.

The Nature Conservation Council (NCC) of NSW says more than 90 per cent of NSW remains open for coal seam gas development under the new CSG policy. NCC said the safeguards were a “common sense” victory for those concerned about CSG in urban areas although “key water resources and sensitive environmental areas” remain at risk.

NCC campaigns director Kate Smolski said in a statement the government is permitting gas and mining companies that own agricultural land within critical industry areas to opt out of the exclusion zones.

“This will result in critical industry clusters being hollowed out from the inside,” she said.

The NSW Greens mining spokesperson Jeremy Buckingham said the reforms did not go far enough and failed to protect other important agricultural industries including horticulture, rice and other cropping, irrigation areas, dairy, oysters and tourism.

“96.6 per cent of NSW, including most agricultural, environmental and tourism areas can still be turned into a gas field,” he said.