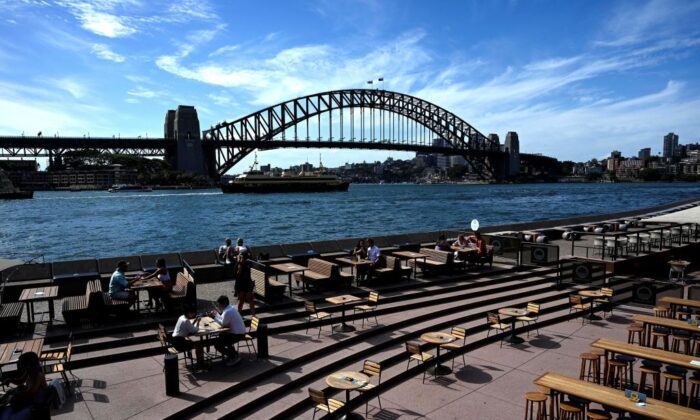 Seatings for restaurants are mostly empty along Sydney Harbour due to COVID-19 coronavirus concerns, in Sydney on December 24, 2020. (SAEED KHAN/AFP via Getty Images)
Australia

A New South Wales (NSW) parliamentary inquiry into the state’s Delta coronavirus outbreak will resume as more regional areas toggle in and out of lockdown.

The upper house public accountability committee is exploring the state government’s handling of the current outbreak and will hold a further hearing on Sept. 17.

“The committee will be taking evidence from those who have borne the brunt of the government’s lockdown of certain Sydney LGAs, with a particular focus too on the management of the justice system during this extremely difficult time,” the NSW Greens MP said.

It comes as Lismore and Albury have re-entered lockdown for at least the next seven days, after three cases were detected across the two areas.

The sources of the infections in both regions are unknown, but Deputy Chief Health Officer Dr Marianne Gale suspects they are linked to Sydney.

The Lismore case has prompted a change in the “border bubble” arrangement negotiated only days ago by the Queensland and NSW governments.

With the city of Lismore declared a restricted zone again, anyone who has been in the area in the past 14 days will now be unable to enter Queensland.

The cross-border community of Wodonga has not joined Albury in lockdown, but Victorian Premier Daniel Andrews flagged there could be some “knock-on effects”.

Just hours before Lismore and Albury were plunged back into lockdown, stay-at-home orders were repealed across 12 other regions.

NSW reported 1351 new local cases of COVID-19 and 12 deaths in the 24 hours to 8pm on Wednesday, taking the toll for the three-month virus outbreak to 210.

Twelve people have been diagnosed with COVID-19 across three social housing buildings in inner Sydney Redfern.

NSW Health Minister Brad Hazzard said it was another example of the virus “effectively identifying and moving in on the socially disadvantaged”.

A mobile vaccination team is visiting each tower building to provide vaccinations to residents.

Meanwhile, Deputy Premier John Barilaro revealed the NSW government has prepared a “draft” reopening roadmap for when the state reaches 80 per cent double-dose vaccination in its eligible population.

It follows the government last week releasing its plans to restore some freedoms to the fully vaccinated at 70 per cent double-dose vaccination coverage.