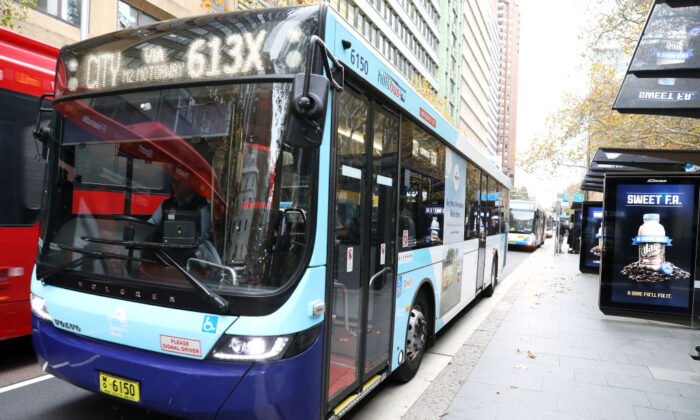 A general view is seen of buses and few peaople at the Wynyard park bus stop on May 25, 2020 in Sydney, Australia.(Photo by Mark Kolbe/Getty Images)
Australia

NSW Bus and Train Strikes to Continue This Week

The Transport Workers Union (TWU) and the Rail, Tram and Bus Union (RTBU) have notified Transit Systems that their members will be taking part in the strikes.

Bus services in Sydney’s Inner West and south-western suburbs will be affected, and Sydney train and NSW Trainlink Intercity services.

According to the TWU, the bus strikes come after drivers’ calls for “same job, same pay” went unanswered by Transit Systems and the NSW Government.

Drivers also turned off Opal card readers for three days last week, to which Transit Systems responded by attempting to dock hundreds of dollars from their pay.

TWU NSW State Secretary Richard Olsen said drivers were given little choice but to strike, given their calls for equal pay had been ignored.

“All that bus drivers are asking for is the simple guarantee that if you drive a public bus in Sydney, you’ll get paid the same as everyone else doing the same job,” he said.

He added that the State Government’s privatisation of Sydney’s buses had caused this mess where drivers’ pay and conditions can be quite varied although they do exactly the same job.

“We are calling on Transit Systems and the State Government to stop playing games and to come to the table to reach a fair agreement with these drivers, including ‘same job, same pay,” Olsen said.

A Transit Systems Spokesperson said that the TWU was misleading the public by saying the Opal card readers were off last week, when in fact, 98-100 percent of machines were active across most of the network, and all services were running to schedule, with no disruption to customers.

Meanwhile, Sydney train and NSW Trainlink Intercity services are expected to see delays on Tuesday, with a reduced timetable and some cancellations.

Transport NSW reported that trains would run every 30 minutes on some Sydney suburban lines, with services stopping at all stations, resulting in longer journey times.

The RTBU has said that train drivers will refuse to drive foreign-made trains on Tuesday, meaning 75 percent of trains will be impacted.

RTBU NSW Secretary Alex Claassens said that due to negotiations for a new enterprise agreement being stalled, workers have been left with no option but to take industrial action.

“Workers don’t want to have to take action, but we haven’t been left with any other options. Management and the government are refusing to commit to basic safety, hygiene and privatisation provisions as part of enterprise agreement negotiations,” he said.

“We’re very aware of the impact this will have on commuters, but we also know that not taking action will leave workers and commuters at risk.”

Drivers would also like to see the enterprise agreement include a commitment to jobs in the event of privatisation, a guarantee that changes to their services will leave them as safe or safer, and a commitment to maintaining the current level of hygiene using publicly owned jobs.

In response, the Transit Systems spokesperson said they had held nine negotiation meetings so far, of which the TWU attended only one and the RTBU four.

“We have listened and communicated extensively with our employees, including regular twice-weekly Q&A updates, informative videos, and an internal briefing on the proposed Enterprise Agreement for all employees, which included 60 minutes of paid time to those who viewed the session,” he said.

“We will continue to work with our employees and look forward to reaching a positive outcome,” he added.