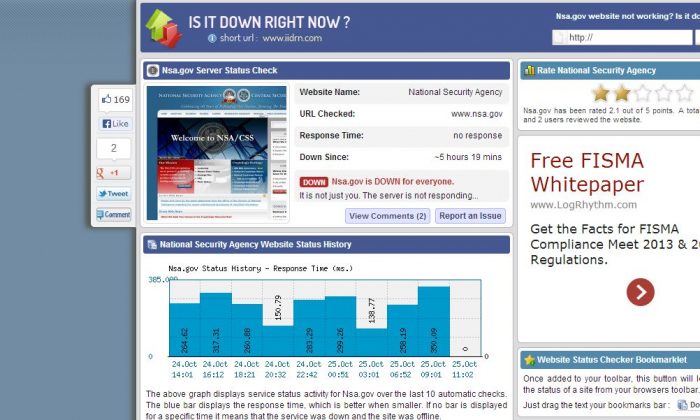 A screenshot of Isitdownrightnow.com shows that the NSA website is down.
Tech

The website for the National Security Agency, NSA.gov, was down on Friday. There were unconfirmed reports and rumors that it might have been hacked via a DDoS attack, and a Twitter account that purportedly belongs to Anonymous seemed to claim responsibility.

The intelligence agency has been under fire after leaker Edward Snowden released a cache of secret documents about it earlier this year.

“It is not just you. The server is not responding…” the website said.

Russian state-run broadcaster RT.com reported that the NSA website may have been subjected to a DDoS hack.

“So If it’s a attack comming from me, or maybe from a country? won’t say! It’s just looks like a start of a cyber war,” reads the Twitter account of AnonymousOwn3r, which appears to be affiliated with the Anonymous hacking group.

On Twitter, several Anonymous-affiliated accounts referred to the outage.

“Aww don’t panic about http://nsa.gov being down. They have a backup copy of the internet,” reads a tweet from AnonyOps.

Another wrote: “Guys relax, you can still follow the #NSA on tumblr.”