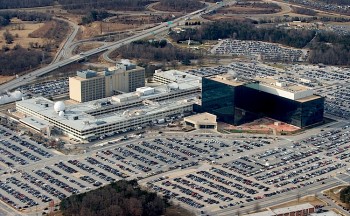 The National Security Agency (NSA) headquarters at Fort Meade, Maryland, as seen from the air in January 2010. (Saul Loeb/AFP/Getty Images)
US

The National Security Agency (NSA) declassified reports describing its attempts to decipher what it describes as a “radio message” received from outer space.

A document on “Extraterrestrial Communications” by Dr. Howard H. Campaigne describes NSA efforts to interpret and mathematically decode the message. It states, “Recently a series of radio messages was heard coming from outer space. The transmission was not continuous but was cut by pauses into pieces which could be taken as units, for they were repeated over and over again.”

The report includes the NSA transcription of the message, using letters of the alphabet as designated place holders for the different variations in the message. “Each message except the first is given here only once,” it states. “The serial number of the message has been supplied for each reference.”

A related document details NSA efforts to decipher the meaning of the extraterrestrial communications, stating "At every step of the solution we make a guess at the meaning."

Both reports are included in a a recently declassified NSA collection of more than 50,000 pages of documents detailing cryptology, early computer development, intelligence documents, and numerous other topics in archives ranging from before World War 1 to the 1960s on June 8th.

Other documents include old press articles covering UFO sightings, reports, or fantastical stories of imminent alien invasion that were examined and kept in possession of the NSA. Many sightings describe the UFOs as “probably a balloon,” but are heavily censored with large blacked out segments.

They include sightings by Communications Intelligence and COMNAVSECGRU, Naval Security Group Command, as well as UFO sighting reports by the Joint Chiefs of Staff, the Department of State, and the Navy.

Among them is an Air Force research report regarding the “Roswell Incident,” a Defense Documentation Center bibliography of UFO reports, and other documents on UFO-related research.

All of these articles and more can be found at the collective release on the NSA’s official website.