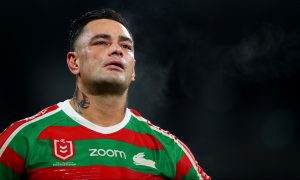 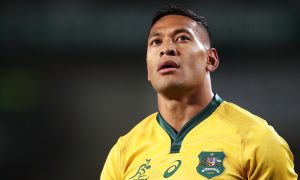 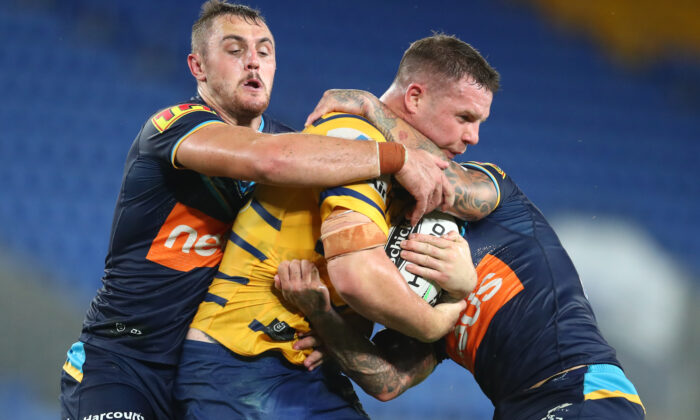 Nathan Brown of the Eels is tac during the round 2 NRL match between the Gold Coast Titans and the Parramatta Eels at Cbus Super Stadium on March 22, 2020 in Gold Coast, Australia. (Chris Hyde/Getty Images)
Australia

The National Rugby League (NRL) has sent a broadcast deal to both Nine and Fox Sports worth close to $2 billion, with both networks’ boards to meet this week to discuss it.

The NRL is powering towards finalising a television deal worth close to $2 billion, after wrapping up almost two months of high-powered negotiations.

The Australian Rugby League (ARL) Commission on Tuesday approved a deal to be sent to both Nine and Fox Sports, with approval still required from both their boards.

The deal will see Fox Sports remain as the game’s Pay TV broadcasters until at least the end of 2027.

Nine’s deal will at this stage run until the end of 2022, however it could still extend.

“The ARLC have approved the negotiated position that myself and (interim CEO) Andrew (Abdo) have come to with the broadcasters,” ARL Commission chairman Peter V’landys told AAP.

“The broadcasters have to go back to their boards for approval.

“The negotiations have always gone on knowing both parties have to go back to their boards for approval.”

Those meetings are now expected to take place in the coming days, meaning all will be finalised before the season resumes on May 28.

It has also alleviated fears Nine would walk away from the negotiating table after chief executive Hugh Marks warned the network did not need the NRL.

It also marks a significant turnaround in the NRL’s finances.

Just two months ago V’landys claimed the league was at risk of catastrophic consequences of the coronavirus, amid fears the game would not resume.

But the deal will give the NRL stability for the coming seasons and allow the ARLC to distribute funds to cash-strapped clubs who are struggling through a financial crisis.

A pay deal has also since been struck with players to reduce their salaries by 20 percent this year.