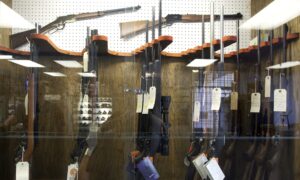 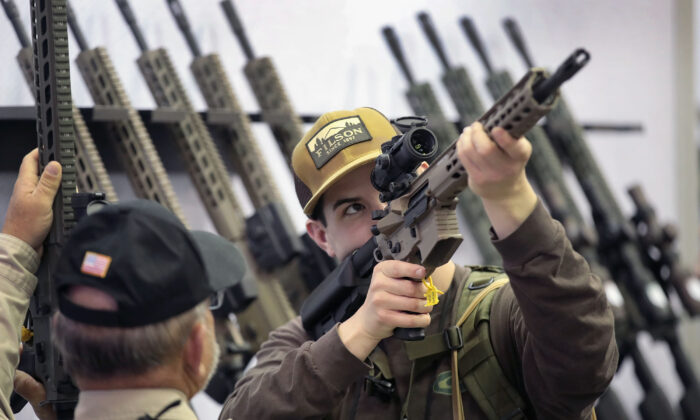 Gun enthusiasts check out a rifle at the National Rifle Association convention in Indianapolis, on April 27, 2019. (Scott Olson/Getty Images)
US News

The National Rifle Association (NRA) has seen an increase in new members in recent months, with 150,000 signups in 2021 alone.

On average, the gun-rights group is seeing about 1,000 new members a day, Amy Hunter, the NRA’s director of media relations, told The Epoch Times.

The surge is attributed in part to gun restrictions being discussed by Democrats in Congress and President Joe Biden.

“We’ve had two federal bills that have been passed in the House, and they’re going to be heard in the Senate soon. You have Biden talking about executive action that he’s going to take, and it’s been pretty steady throughout history that when you have an anti-gun president in office, and he’s passing laws, signing executive action, that usually causes a surge in NRA interest in membership,” Hunter said.

The NRA now has around 5 million members.

“There was a real surge during COVID. People were looking around at what was going on and were scared—all of the services, everything’s being shut down, and they’re being told to stay in their home. The only outlet they have is to watch TV, and on TV they’re seeing riots and unrest happening across the country, they’re seeing that their politicians are closing gun stores, using emergency powers to sort of shut down the Second Amendment,” Hunter said.

“I just think people react as they always do when there are periods of uncertainty. They want to make sure that they can keep their families safe. We’re also seeing headlines about police furloughs and calls to defund the police. Law-abiding people feel like, ‘Well, worst-case scenario, I better make sure I can protect my own family.'”

“I pledge to continue to work with you—and with survivors, families, and advocates across the country—to defeat the NRA and end our epidemic of gun violence,” he told former Rep. Gabby Giffords (D-Ariz.) in January before taking office.

More recently, in the wake of two mass shootings, the White House said Biden will take executive action on gun control, even as Biden remains confident that Congress will approve tighter restrictions.

“I’m the only one who has ever got them passed, man,” Biden told reporters on March 29, referring to the 10-year ban on so-called assault weapons that he helped steer to Senate approval in 1994.

Biden said last week that he was looking into whether he has authority to take action on imported weapons and guns made with 3D printers.

The House of Representatives on March 11 approved two bills that would expand background checks. But Democrats in the upper chamber need to convince 10 Republican senators to back them.

One of the benefits for NRA members is receiving alerts regarding gun control efforts advancing in members’ home state legislatures, or Congress, Hunter told The Epoch Times. Members are encouraged to reach out to lawmakers on various bills, with NRA officials also applying pressure.

The group is fighting the bills being considered by the Senate, but isn’t taking lightly Biden, congressional Democrats, or former New York City Mayor Michael Bloomberg, who advocates for harsher gun restrictions and pours money into groups that push for them.

“We have a better membership, we have a stronger base, we have people who really believe in liberty and freedom and the Constitution, but we never underestimate our opponents,” she said.