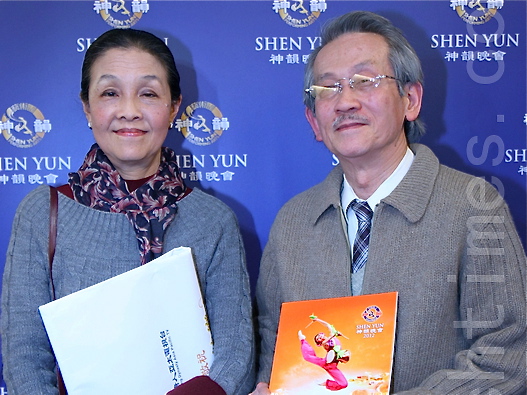 After seeing the performance, Mr. Wang Wen-xin said, “It’s indeed a well-done and perfect performance. … It’s hard to find a performance of such a perfect design of costumes and backdrops.”

“The design of the costumes and the collocation are first-class. They not only take into account the artists, but they also consider the overall harmonization. This is the ideal design of costumes. Besides the richness of color, collocation is also very important. Everyone in the artistic circles knows that it is a very difficult [thing to do].”

Wang Wen-xin cited the program Sleeves of Silk to illustrate his admiration of Shen Yun’s colors and dance, saying, “It is a traditional female dance, and the colors of the costumes are rich and harmonious. The movements of the dance are very graceful and in great unison.” He emphasized that the performers’ exquisite dancing skills and the colorful visual effect left a deep impression on him.

“The three solo vocalists’ performances were excellent. They are very outstanding vocalists and their capabilities of interpreting those songs are extraordinarily good,” he said.

Wang Wen-xin spoke of the lyrics of the songs: “The composers have done a great job … The lyrics are really very meaningful. They are especially great for transmitting beliefs and ideas. In terms of the selection and use of words, the standard is very high.”

In addition, he praised the performance of the Shen Yun Orchestra, saying it was “really exquisite.”

According to the company’s website, “Shen Yun’s one-of-a-kind orchestra, with its all-original compositions, blends East and West like no other. The distinctly Chinese sound of ancient instruments like the erhu and the pipa are bathed in a rich sea of Western strings, percussion, woodwinds, and brass. The result—two great classical music traditions producing one fresh, unexpected sound.

Wang Wen-xin added that the dance artists brought him creative inspiration. “They must have gone through tremendous efforts to reach such achievements. It is very good inspiration for me. I should work harder, so as to achieve the ideal level. I should never slacken one bit.”

His wife, Chen Chu-Yun, said, “Shen Yun’s dances are first class; their movements are really excellent. It is very rare to see such a top-level performance. The overall visual effect is fascinating. The colors of the costumes in every program were fabulous, and I really like them very much.”

Wang Wen-xin has published numerous famous novels, including “The Family Catastrophe” and “The Backed Against the Sea,” which have been translated into many foreign languages. In 2011, Mr. Wang was recepient of the Knight of the Order of Arts and Literature from the French Government, as well as the Huazhong Literary Award in Malaysia. In addition, Mr. Wang’s biography was adapted into a film titled “The Man Behind the Book.”