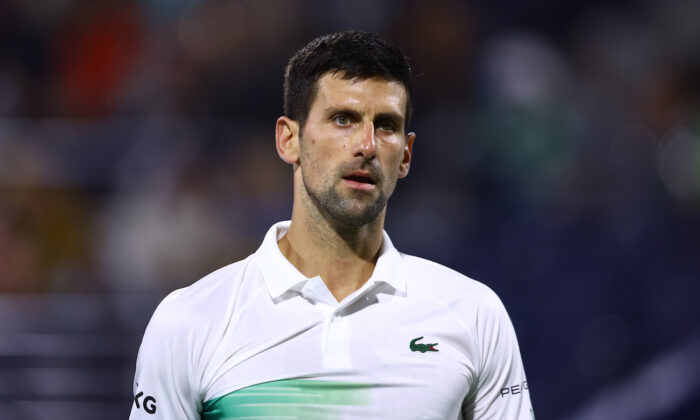 Tennis player Novak Djokovic announced Wednesday he will not be competing in the Indian Wells Open or Miami Open, citing his unvaccinated status in face of rules by the Centers for Disease Control and Prevention (CDC) on requiring vaccines for noncitizens to enter the United States.

“While I was automatically listed in the [Indian Wells Open] and [Miami Open] draw I knew it would be unlikely I’d be able to travel,” he wrote on Twitter. “The CDC has confirmed that regulations won’t be changing so I won’t be able to play in the US. Good luck to those playing in these great tournaments.”

In addition to being vaccinated, noncitizens must also test negative for COVID-19 to enter the United States.

The Indian Wells Open is held March 7–20 and the Miami Open will be held March 22–April 3.

Bulgarian Grigor Dimitrov will move into Djokovic’s position in the draw ahead of the start of the first round of the tournament on March 10.

Djokovic was previously unable to compete in the Australian Open after he was detained on Jan. 6. He left the country on Jan. 16 following a legal battle.

Hawke had claimed—despite conceding that the 34-year-old Serbian posed “negligible risk” of transmitting the coronavirus—that Djokovic was a “high-profile unvaccinated individual” who could stir up anti-vaccination sentiment in the country such that people may refuse to get vaccinated or get their booster shots. Attorneys for the Australian government said Djokovic could become an “icon of free choice” if allowed to stay.

Rafael Nadal went on to win the Australian Open and record his 21st Grand Slam title, breaking a three-way tie between himself, Djokovic, and Roger Federer for the number of Grand Slam titles.

In an interview with the BBC in mid-February, Djokovic said he is willing to skip Grand Slam tournaments over his unvaccinated status.

“I was never against vaccination,” he told the outlet, noting he had taken vaccines when he was a child, “but I’ve always supported the freedom to choose what you put in your body.”

“Because the principles of decision making on my body are more important than any title or anything else. I’m trying to be in tune with my body as much as I possibly can,” he said.

France has loosened COVID-19 restrictions and is set to lift its vaccination mandates on March 14, which will enable Djokovic to compete in the French Open in May.