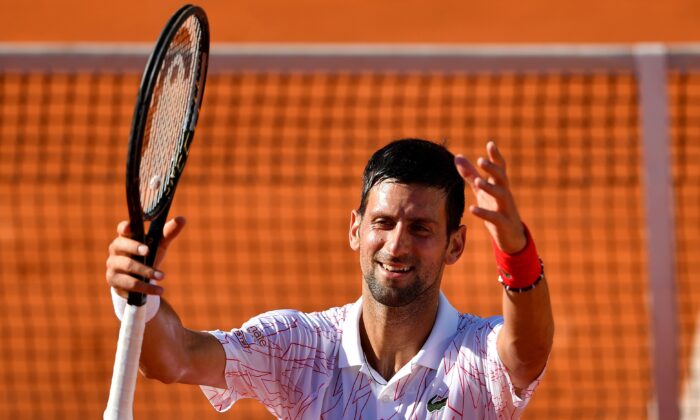 Victoria Kelly-Clark
Victoria Kelly-Clark is an Australian based reporter who focuses on national politics and the geopolitical environment in the Asia-pacific region, the Middle East and Central Asia.
View profile
Follow
and Marina Zhang

Novak Djokovic has issued a statement apologising for not isolating after testing positive to COVID-19 in December saying that he had felt obliged to do an interview and believed since he was asymptomatic and was socially distanced it would be alright.

“This was an error of judgement and I accept I should have rescheduled this commitment,” Djokovic said.

In the statement, posted on Instagram on Jan. 11, Djokovic explained that he’d been at a basketball event in Belgrade on Dec. 14, where numerous people contracted COVID-19 and he then took a Rapid Antigen Test on Dec. 16, which came back negative, and “out of an abundance of caution” had gone to get a PCR test. Djokovic did not receive the notification of his positive test result until Dec. 17.

Djokovic also explained that he had not received confirmation of his positive COVID-19 test result until after he had attended a tennis event in Belgrade on Dec.17, where he awarded prizes to children. He noted that prior to attending the event he took a COVID-19 Rapid Antigen Test (RAT) to ensure he did not have the virus, which came back negative.

“I was asymptomatic and felt good, and had not received the notification of a positive PCR test result until after that event.”

The apology from Djokovic comes after questions were raised over his successful application for a medical exemption to enter Australia as part of his campaign to win the Australian Open when photos of the award ceremony in Belgrade emerged on Sunday.

Tennis Australian and the Victorian government approved Djokovic’s exemption to play in the Australian Open on Dec. 30 after the world number one male tennis player submitted an exemption application for the tournament declaring that he had tested positive for COVID-19 on Dec. 17, but had not had a fever or other symptoms in the preceding 72 hours.

Djokovic said that in making his statement he wanted to note that he had wanted to correct the misinformation currently circulating in the media, which he deemed important to alleviate the broader concerns around his presence in Melbourne.

He also explained that his visa debacle had been the result of human error, with one of his administrative team ticking the wrong box about his prior traveling before he entered Australia.

“This was human error and certainly not deliberate,” Djokovic explained.

The tennis player also said he respected the Australian government and would not be making any comments about the country’s visa processes.

Djokovic was released from immigration detention in Australia on Jan. 10, after federal judge Anthony Kelly re-instated the tennis player’s visa.

At the hearing, Kelly deemed the decision to cancel Djokovic’s visa “unreasonable”  because the player had not been given enough time to “consult others” and make further submissions on his own behalf which could have cleared up any misunderstanding.

However, the Minister for Home Affairs, Karen Andrews, filed a submission against the appeal on Jan. 9, expressing that Djokovic can still be detained despite court orders.

“An order for immediate release does not prevent re-detention if there is the power to detain,” the submission read.