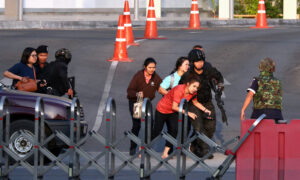 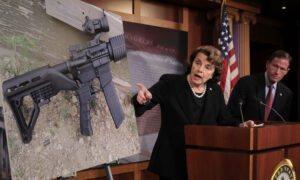 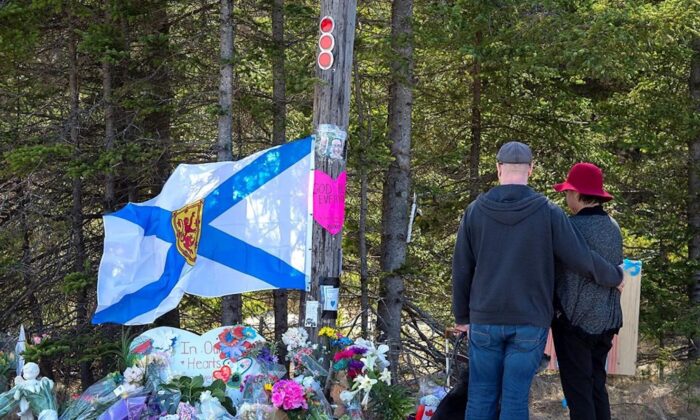 A couple pays their respects at a roadblock in Portapique, Nova Scotia, Canada, on April 22, 2020. (Andrew Vaughan/The Canadian press)
Canada

The Nova Scotia government has activated a roster of psychologists to help address the mental health challenges facing the province’s weary population.

In a release Tuesday, the Nova Scotia Health Authority said people can call in to a free service set up by the Association of Psychologists of Nova Scotia to talk about their distress over the recent mass shooting that left 22 people dead.

The agency is opening a special phone line as of Wednesday to allow Nova Scotians to talk about their difficulties and ways of coping with the tragedy amid the COVID−19 shutdown.

Many residents of the province already appeared to be struggling with stress prior to the shootings.

In a national survey conducted before the killings, the Angus Reid Institute noted that of 53 Nova Scotians included, more than half said “worry” was the best word to describe the emotion they’re feeling the most.

Dean Perry, a clinical psychologist at St. Martha’s Regional Hospital in Antigonish, said more than 50 psychologists will be available to provide assistance through the service set up by his association’s post-disaster committee.

He said the hope is that people who are in need of immediate help access the service, and those needing further care could be given a referral.

“The design [of the service] is to have people who are affected by the tragedy to be stabilized and to have their immediate needs and concerns looked at,” Perry said.

Dr. Robert Strang, Nova Scotia’s chief medical officer of health, said officials are aware of the challenges posed to both physical and mental health by the dual “stressors” of the shootings and the COVID-19 restrictions.

“We are actively looking at opening up perhaps, people’s options to being outdoors more,” said Strang.

However, he didn’t specifically indicate how soon that might happen. Strang said it could still be weeks before any restrictions are lifted, and even when they are, people will have to follow basic requirements to limit the size of social gatherings.

People who knew those killed in the shooting say it has been difficult to cope with the loss, particularly in isolation.

Jane Andrews, whose distant cousin Joey Webber was murdered by Gabriel Wortman on Sunday in Shubenacadie, said the shooting has intensified anxious emotions that were already present due to the provincial shutdown.

Even prior to the shooting, the 65-year-old retiree said she often felt exhausted, although she hadn’t been physically active, and had periods of uncontrolled crying.

“Then came this horrendous massacre in our province. This was my breaking point. I screamed, I ranted, I raged. I looked up and challenged God: ‘Why? When will enough be enough? If you’re testing me, God, I’ve failed,'” said the resident of Hubbards.

Alec Gratto, the younger brother of Jamie Blair—a mother of two young boys killed along with her husband Greg Blair at their home in Portapique—said he is aware of the kind of mental distress Nova Scotians are feeling and urged people to seek help.

“I went through mental health [services] years ago, and it was beneficial. Just make a phone call … and start talking,” he said in an interview.

The grief in Portapique, the coastal community where the murder spree started late April 18, can be felt across the Bay of Fundy in the small community of West Gore, said resident Kathy Didkowsky.

When word got around that there was a shooter on the loose on the morning of April 19, Didkowsky said she struggled to work the lock on her door, because it had been so long since she felt the need to use it.

The rampage ended later that day when the killer was fatally shot by police in Enfield, Nova Scotia, after a 13-hour manhunt through central and northern communities.

While she never met the victims of the massacre, Didkowsky said they still feel like “family,” given the shared way of life that connects villages across Nova Scotia. She said that rural quietude seems to be under threat following shootings.

“Nothing has prepared us for this,” said Didkowsky, 70.

Tanya Sharpe, an associate professor at University of Toronto’s school of social work, said this shows how the trauma of deadly violence can ripple through a community.

In the wake of tragedy, Sharpe said many people need to collectively mourn the loss of a perceived sense of normalcy, often finding ways to come together in an effort to rebuild.

But as COVID-19 has prohibited typical forms of social support, Sharpe expects many will see prolonged symptoms of grief, and said mental health workers need to prepare accordingly.

“It is so fundamental for service providers to have both a short-term crisis intervention plan to help, as well as a long-term [plan],” said Sharpe.

The Nova Scotia Health Authority said in its release that anyone can call 902-422-9183, from 9 a.m. to 3 p.m., Monday to Friday, to arrange a support session with a psychologist within 48 hours.

Psychologists will offer their expertise, free of charge, via online video conference or by telephone, due to COVID-19 restrictions.

By Michael Tutton in Halifax and Adina Bresge in Toronto