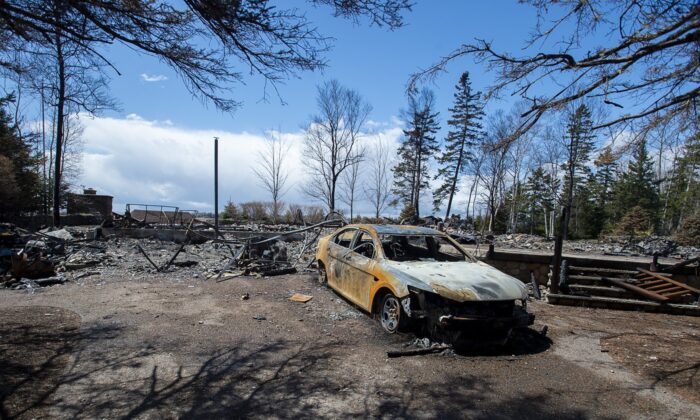 A fire-destroyed property registered to Gabriel Wortman at 200 Portapique Beach Road is seen in Portapique, N.S. on May 8, 2020. (The Canadian Press/Andrew Vaughan)
Canada

After the older brother he had met for the first time 10 years earlier killed 22 Nova Scotians in 2020, a Massachusetts man described his sibling to police as paranoid and said he harboured dark thoughts.

Jeff Samuelson, who in 1970 was put up for adoption in the United States, told RCMP officers that his brother, Gabriel Wortman, shared stories about his “awful” upbringing and repeatedly told Samuelson he wanted to kill their biological parents.

“I always say that we got wired at the same factory but I went down a different assembly line,” Samuelson said in an interview with an RCMP officer on April 27, 2020, days after the worst mass shooting in modern Canadian history.

The interview transcript published Tuesday by the public inquiry into the killings includes Samuelson’s story of meeting his biological family for the first time in 2010, 40 years after he was put up for adoption. It was Samuelson who initiated the contact at the urging of his wife.

Before meeting in person in Nova Scotia, Samuelson said he spoke with Wortman on the phone a few times.

In the calls, the killer “unloaded a mountain of information” about his childhood, Samuelson said, which he described as being “horrendous” and full of violence.

“He was on a tear, he was like so pissed off … you know he just wanted to explode on his childhood and (say) how bad it was,” Samuelson told the RCMP.

In one story, the gunman told Samuelson his father had forced him to shoot his pet dog as a punishment when he was 13 years old. Samuelson said he believed Wortman was angry at his parents for not telling him he had a younger brother who was adopted.

“Forty-one years old and he found this out … it pretty much severed their relationship,” Samuelson told the RCMP. “He had had enough. He hated his parents, there was deep hatred there,” he added.

His biological parents, Paul and Evelyn Wortman, visited the United States to meet Samuelson. Then, in the summer of 2010, Samuelson and his wife travelled from their home in Massachusetts to the Maritimes to see more of the family he had never met. This trip, which included a stay in Portapique, was the first time Samuelson spent time with his brother in person.

The couple stayed with Paul Wortman’s brother, Glynn Wortman, whose home was one of many burnt down during the April 18-19, 2020, rampage, but they visited the house the shooter shared with his spouse, Lisa Banfield.

Samuelson said his brother showed off many weapons when they arrived, including a grenade, a rifle that he pulled out of a workbench in the garage, a “Tommy gun” and a 9-mm handgun with a laser and what he believed was a silencer.

They were shown more than 10 weapons that were spread out throughout the residence, Samuelson said, describing them as “hidden in plain sight.” This led Samuelson to believe the shooter was paranoid.

“Why would you have (weapons) all over the house? But you gotta be ready for action in any—any room in his—in his paranoid world,” Samuelson said.

The brothers didn’t keep in touch, and Samuelson said the last time he remembers speaking to the gunman on the phone was in 2013.

Samuelson said he stopped reaching out to his brother because he was obsessed with money and talking about his personal wealth.

“I didn’t want to just listen to this guy,” he said. “There was no room to build a relationship.”