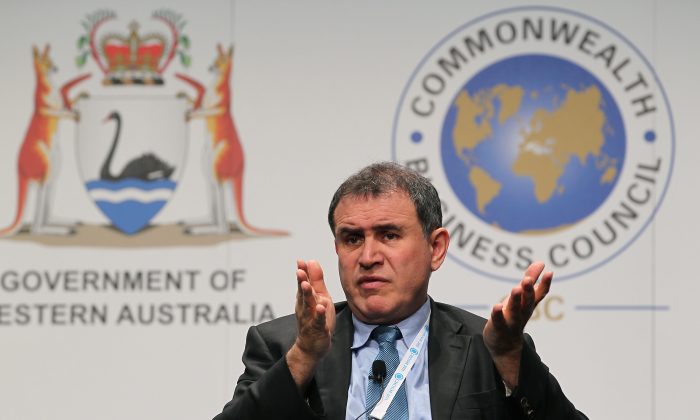 Nouriel Roubini, Bill Clinton’s former senior economist, and a current NYU professor for economics is a bit of a wild card. His influences include mostly leftist thinkers such as John Maynard Keynes, Larry Summers, and Jeffrey Sachs.

However, he also cites Hyman Minsky as one of his influences. So while most Keynesians got subprime wrong, Roubini’s experience with emerging markets and his Minsky background helped him to get subprime right.

Neither Keynes, Summers, or Sachs would or do mind today’s central bank money printing, but Roubini points out its dangerous side effects.

He writes in an op-ed for the World Economic Forum:

“A paradox has emerged in the financial markets of the advanced economies since the 2008 global financial crisis. Unconventional monetary policies have created a massive overhang of liquidity. But a series of recent shocks suggests that macro liquidity has become linked with severe market illiquidity.”

Again, it is probably Minsky talking here. Roubini is correct in citing that central banks have created trillions of new dollars (and euros and yen …) across the globe. He is also correct in saying most major markets are becoming more illiquid.

“For starters, in equity markets, high-frequency traders (HFTs), who use algorithmic computer programs to follow market trends, account for a larger share of transactions. This creates, no surprise, herding behavior. Indeed, trading in the U.S. nowadays is concentrated at the beginning and the last hour of the trading day, when HFTs are most active; for the rest of the day, markets are illiquid, with few transactions.”

He said the bond markets are more illiquid to begin with, because fixed income products don’t trade on exchanges and regulations have forced banks to further scale back trading as well as market making activities.

This is all correct. He also said central banks have mostly created excess reserves, which are credit accounts from commercial banks at the respective central bank. He forgets to mention two important points though.

Those credit accounts can only be used by commercial banks to trade these excess reserves for assets they have on their balance sheets, however, and don’t represent money per se. The excess reserves (currently $2.6 trillion) only yield 0.25 percent and cannot be loaned out or used to purchase goods and services. Their limited utility makes them less useful in terms of real liquidity.

Also, central banks have been increasing their balance sheets on aggregate, buying up and thereby removing assets from the markets. If there are fewer tradable assets, market liquidity decreases. Governments in Europe and in the United States haven’t increased their debt issuance so supply hasn’t kept up.

Total credit market instruments have only increased 10 percent since 2009 while the Fed Balance sheet nearly doubled.

When it comes to the results of this policy, Roubini is again spot on though:

“The longer central banks create liquidity to suppress short-run volatility, the more they will feed price bubbles in equity, bond, and other asset markets. As more investors pile into overvalued, increasingly illiquid assets—such as bonds—the risk of a long-term crash increases.”