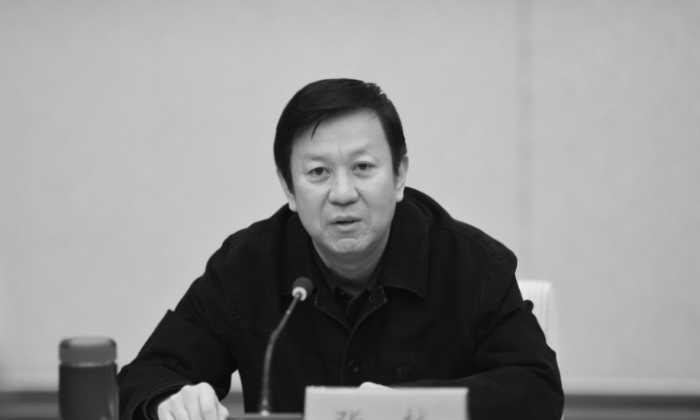 Zhang Yue, security boss of Hebei Province, has been placed under investigation by the Party’s disciplinary agency. (Xilu)
China

A once powerful provincial head of China’s security and law agency, who had built up his career through a network of business and political ties and had a prominent hand in carrying out a nearly 17 year-long persecution of a spiritual discipline, has recently been purged.

On April 16, the Party’s disciplinary agency announced that Zhang Yue, security boss of Hebei Province, was placed under investigation for “seriously violating Party discipline,” though didn’t elaborate on his wrongdoings.

Zhang was dubbed the “security czar of Hebei,” according to NetEase, a popular Chinese news portal that published a detailed investigation of Zhang’s dealings. NetEase also reported that Zhang, who enjoyed swimming, used public funds to pay for a luxurious swimming facility (or bath house) in Shijiazhuang, the capital of Hebei. The female staff at the facility, NetEase said, were hired for their looks, like “flight attendants.” Only public security officials were at or above the ranking of deputy department chief were allowed to use the swimming complex.

Zhang established ties with Guo Wengui, a powerful businessman whose influential business network provided its members with political and legal assistance nationwide. Guo himself reportedly had strong ties with Ma Jian, the former deputy chief of China’s Ministry of State Security, and Ling Jihua, the former chief of staff to ex-Party leader Hu Jintao and former head of the General Office, a key Party gatekeeping agency.

Together, Zhang, Guo and Ma worked together to mount a hostile takeover of China Minzu Securities in 2010, reported NetEase.

The scheme provides an insight into how security muscle in China can be used to make commercial competitors an offer they can’t refuse.

They went to work on two of Minzu Securities’ main shareholders: Capital Airports Holding Company, the largest, which held 61.25 percent, and Hebei Bank, the fourth largest shareholder, with 6.81 percent.

Zhang leaned on Hebei Bank’s government regulator—the Hebei Banking Regulatory Commission—and had them threaten to throw a Party leader working at the bank into prison, reported NetEase. In June 2010, the regulatory commission allowed Beijing Zenith Holdings, where Guo was the controlling shareholder, to buy up the bank’s shares in China Minzu.

Zhang Zhizhong, the president of Capital Airports, was easier to dispose of: he was sentenced to 12 years in prison by the Hengshui Intermediate Court. It is suspected, but not proven, that this was engineered as part of the takeover.

Deals like this characterized the entrepreneurial activities of Zhang and his colleagues as they arbitraged their privileges in the public security and spy apparatus. But one of the key reasons that Zhang was able to obtain such unchecked power lies elsewhere.

Zhang’s quick ascent up the political ladder was the result of his connection to former security czar Zhou Yongkang, according to NetEase. Zhou is known to have built his own career, which also saw a rapid ascent from a provincial leadership post to a central Party role running security, by doggedly following the orders of former Party leader Jiang Zemin. Zhou became one of the most infamous perpetrators of Jiang’s policy to hunt down and torture practitioners of Falun Gong.

Falun Gong, a traditional Chinese self-cultivation practice, teaches five slow-moving, meditative exercises, and exhorts living by the moral principles of truthfulness, compassion and forbearance. Threatened by the rapidly growing popularity of the practice through the 1990s, and its independence from the state, Jiang Zemin ordered a nationwide suppression of the group on July 20, 1999.

Before becoming the head of the Party’s security forces in Hebei, Zhang was chief of the “anti-evil cult” bureau, or the “610 Office,” from November 2003 to December 2007. The “610 Office” was responsible for the persecution of Falun Gong, according to Minghui.org, a clearinghouse of first hand information about the persecution of Falun Gong in China.

The 610 Office once held a privileged position in the Party, but its prestige has come under direct assault under Xi Jinping, with its former head, Li Dongsheng, sentenced to jail for 15 years in January this year.

Zhang Yue’s rise may also have been assisted by a personal connection. His second wife, Meng Li, was friends and colleagues with Zhou’s second wife, Jia Xiaoye, according to NetEase. Both Meng and Li had worked at the state-run broadcaster CCTV in years past, Meng as a host, and Jia as a journalist.

The persecution of at least 10 practitioners of Falun Gong is directly attributable to the orders of Zhang Yue, according to the World Organization to Investigate the Persecution of Falun Gong, a New York-based nonprofit.

Liu Yongwang, a Baoding resident, was a chief electrical engineer at a foreign company in Beijing before he was subject to persecution at the Baoding Forced Labor Camp in 2001 after being kidnapped by police in Shanghai, according to Minghui. For three years, Liu experienced multiple forms of torture, including forced feeding, being whipped by leather belts and bamboo sticks, shocks with electric batons, and being tied to a bed board. In June 2006, Liu was again abducted by police and taken to Tangshan Jidong Prison.

Liu was released after finishing his 8-year sentence in August 2013. And in February 2016, he filed a lawsuit against Jiang.