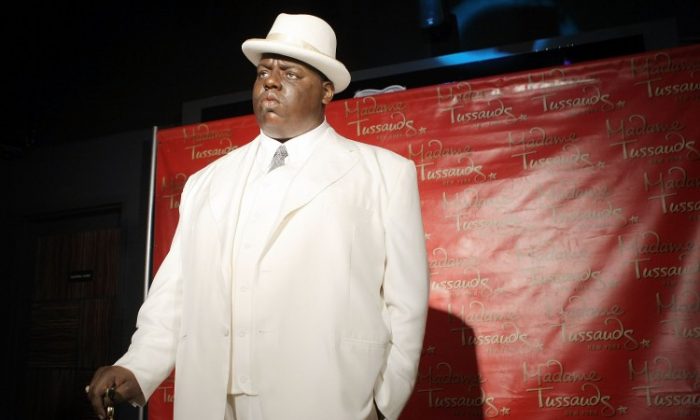 A wax figure of Christopher 'Biggie Smalls' Wallace on display at its debut at Madame Tussauds in Times Square on Oct. 25, 2007 in New York City. (Scott Gries/Getty Images)
Entertainment

Notorious B.I.G. Apartment on the Market

The Notorious B.I.G.’s former apartment in Brooklyn is now up for sale.

Realty website Zillowblog.com said the home where Biggie Smalls, born Christopher Wallace, used to live has hit the market for $725,000. Realtors are saying that the home is located in “Clinton Hill.” In his lyrics, Wallace commonly referred to his neighborhood as Bed-Stuy, short for Bedford-Stuyvesant.

“While B.I.G.’s childhood home at 226 Saint James Pl APT 3L, Brooklyn, NY 11238 is now seen as a hip-hop landmark, Wallace reportedly referred to it as his ‘one-room shack,’” Zillowblog wrote.

But a few years ago, the home was renovated and includes crown molding and hardwood floors. In 2004, the apartment sold for nearly $425,000, according to the blog.

“The tour buses that come by regularly are enough,” she said. “I don’t really know yet what impact, if any, [Biggie’s looming presence] will have on the sale. I think it’ll be notable, but I don’t know if novelty translates to a purchase.”