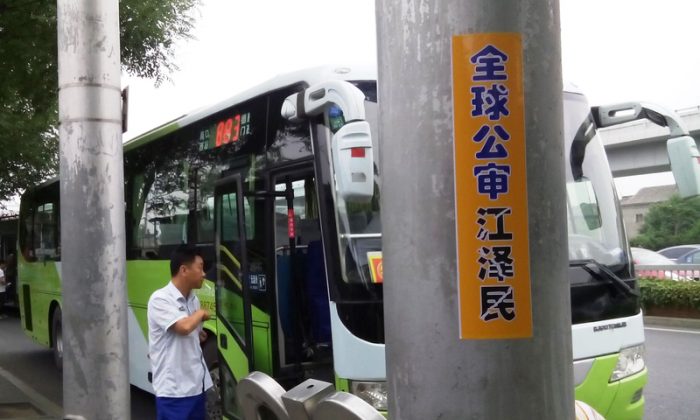 A slogan with the words “Bring Jiang to Justice” appear on an electricity pole in Beijing. (Minghui.org)
China

Notices Calling for Prosecution of Ex-Leader Pop Up Across China

Since the beginning of June, the dull-colored public lamp posts and electric meters in Beijing, Changchun City, Langfang City, and Inner Mongolia have been given a bright political edge, with posters in blue, green, and orange, bearing the words: “The World Brings Jiang Zemin to Justice.”

The appearance of these stickers coincides with the recent rash of criminal complaints initiated by Chinese citizens, most of them likely practitioners of Falun Gong, a popular, persecuted spiritual practice, against Jiang, the former Communist Party chief.

As of July 2, over 18,000 complaints have been submitted to China’s highest legal and prosecuting bodies, who have acknowledged over 10,000 of them, according to Minghui, a website that carries first hand reports from China about Falun Gong and the persecution of it.

Falun Gong, a traditional Chinese spiritual meditation practice, has been persecuted since July 20, 1999. The decision to target the practice was made by Jiang Zemin, and it became his chief political crusade over more than the next decade. Over 3,800 adherents are confirmed to have been killed in the persecution, according to Minghui, though the true death toll is unknown given information controls. Researchers suspect that tens of thousands have been killed so that their vital organs could be sold for profit. Hundreds of thousands are believed to languish in various forms of detention, where they are subject to torture and abuse.

Sixteen years since the persecution began, Falun Gong practitioners in China are now leading the call to bring Jiang to trial in China, on charges of crimes against humanity and genocide. They’re using the Chinese regime’s highest legal institutions—the Supreme People’s Court and the Supreme Procuratorate—in an attempt to have the Party live up to its own promises about the rule of law. Nevertheless, the persecution of the practice remains state policy, and any decision to actually prosecute Jiang would be deeply political, and likely only made in conjunction with broader changes in Party policies.

Observers have been supportive. Hu Ping, the founding editor of Chinese magazine Beijing Spring, thinks that more should be done to raise awareness of the legal campaign both inside China. The bright stickers calling for Jiang to be “brought to justice” seem to be responding to just this need.