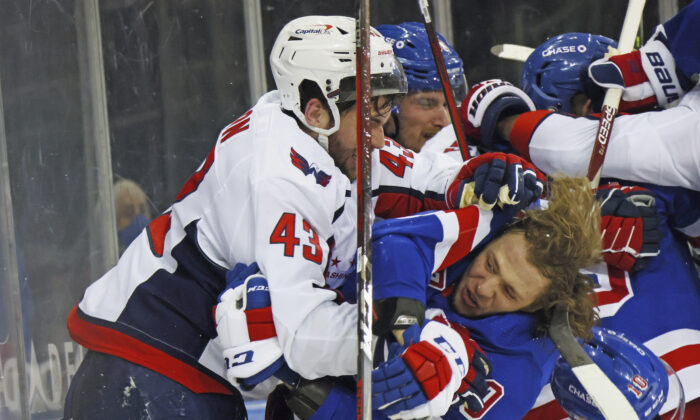 Tom Wilson (No. 43) of the Washington Capitals takes a roughing penalty against the New York Rangers' Artemi Panarin (No. 10) on May 3, 2021, in New York. (Bruce Bennett/Pool Photo via AP)
Viewpoints

Hey, there’s life in the old league yet. And maybe, just maybe, more reason to sit and watch what too often turns into a snore fest these days—Connor McDavid and Auston Matthews notwithstanding.

I’m referring of course to the NHL, where on May 5 fans got to see some old-style male bonding between the New York Rangers and Washington Capitals. Call it enforcing the code, call it guys doing what some guys love to do—the Rangers stepped up to defend two of their teammates who had been roughed up in the previous game by the Capitals’ Tom Wilson.

Don Cherry would have loved it.

A quick recap. Wilson had gone after the Rangers’ Pavel Buchnevich and he hurt Artemi Panarin after the Rangers, in his opinion, had taken liberties with the Capitals’ goalie. Since the league has all but outlawed fighting and enforcers and, you know, stuff that might cause a head injury, their Ranger teammates held back on May 3 to see what the league would do to discipline Mr. Wilson. It gave him a slap on the wrist—a $5,000 fine and no suspension, which left the Rangers fuming. So they waltzed onto the ice two days later and proceeded to pound their opponents with good imitations of Dave “The Hammer” Schultz and Ted Green or John Ferguson of yesteryear.

It was a bit of a brawl and yes, Cherry would be smiling.

I’ve written here before that hockey isn’t what it used to be. For one thing, it’s hard to tell who is who with all players wearing helmets and appearing (and often playing) like interchangeable widgets. For another, hockey isn’t nearly as hard-fought now, with multi-million-dollar salaries and the European influence.

But as General George MacArthur once said, a real man likes to fight, and fighting is a large part of hockey’s heritage. Ask Gordie Howe or Orland Kurtenbach.

I was lucky to know and befriend Don Dietrich, a defenceman from Deloraine, Manitoba, who played with the Chicago Blackhawks (and roomed with Doug Wilson and Tony Esposito, having great stories about each man). Don was a gifted athlete, strong and good at any sport. He might have pitched professionally but declined an offer to enter the baseball stream, preferring hockey. Don was also gentle by nature—a lover not a fighter—which his large frame and ham-like fists belied. To his pro coaches in the early 1980s, he was big and should fight. So he fought. Was it mere coincidence that Don was diagnosed with early-onset Parkinson’s disease in his 30s? I think not.

Don told me the following anecdote about fighting John Wensink for our book “No Guarantees,” his life story, and I think you’ll enjoy it. I’m sorry to say that Don’s cancer recurred and he died Feb. 16 at the age of 59. That disease had also come on in his 30s, and he dealt with it and the Parkinson’s bravely, with dignity.

Here’s the fight, in his words, edited for length:

It was September of 1981. I was 20. My second training camp with the Chicago Blackhawks had gone well, but I knew where I was heading—the AHL’s New Brunswick Hawks. Bob Pulford, the GM, calls me into his office and tells me I have to “pass better, shoot better, skate better. You’re going down.”

In the American Hockey League, the big hype at the time was an older Bruins guy by the name of John Wensink. He had played for the Quebec Nordiques the year before and had cleared waivers and was sent down. Wensink had played for Don Cherry, and Cherry loved him.

We went into Fredericton and Wensink was mad. I’m sure he’s protected a lot of guys in Quebec and they’ve abandoned him, and he’s on the end of his career. He’s not where he wants to be.

At one point I get into a scuffle in front of the net and was pushing a guy. He threw his gloves off so I threw mine off. Nothing really came of it. I skated over to the penalty box with the official and felt a tug at my sweater. I turn around and it’s John Wensink.

We’re in the middle of the ice and he wants to “dance.” My heart was just pounding. I thought to myself, well, the linesman who was with me kind of let me go. I thought, OK. I’m standing there and I kind of faked like I was looking away from Wensink. Then I smoked him as hard as I could.

I know I punched a foot behind his head. When I trained with Rocky Addison the boxer, that’s what he told us to do. It puts more into the punch. Well, Wensink just growled, literally, and grabbed hold of me and started throwing punches. I’m yelling “Help!” My hands are going, my face is getting peppered and I’m trying to hang onto him. Wensink was this big head of hair and eyebrows standing out. I said that’s it. I went down; he picked me up and kept punching.

Dave Feamster jumps on Wensink and we all roll around. We’re sitting in the penalty box because we were the initial fight; everyone else got thrown out. My face was swelling up and I’m thinking, I’d better learn to pass, shoot, and skate better because this is a tough way to make a living!

Brad Bird lives in B.C. but still visits Deloraine, Manitoba. His book “No Guarantees” tells the story of his friend Don Dietrich of Deloraine who had a 10-year pro hockey career and raised three sons with his wife, Nadine.