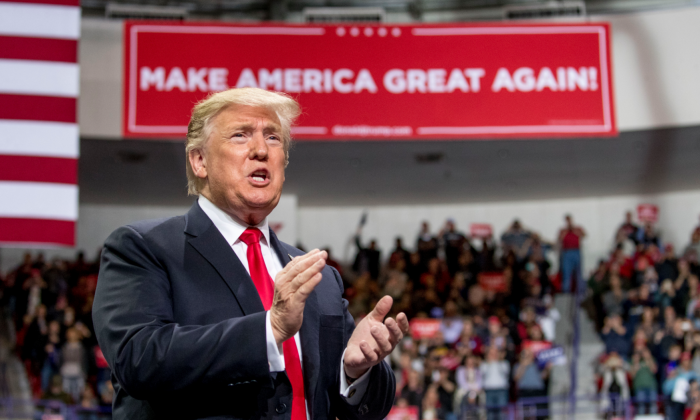 In his usual mixture of scripted points punctuated by off-the-cuff references to current events, President Trump railed against what he described as a “coup” attempt and an “impeachment witch-hunt” driven by “the extreme Left.”

“I call them AOC-plus-Three,” said the President, referring to self-described Democratic socialist Alexandria Ocasio-Cortez (D-N.Y.). “AOC, that’s a real beauty. You only have 11 years to live, folks, 11 years, because climate change is just coming up on us so fast! You know, it was 12 years, but today I heard one of these crazies say ‘It’s down to 11′”

“And they arrested Jane Fonda! Nothing changes! I remember 30, 40 years ago, she always has the handcuffs on—oh man! She’s waving to everybody with the handcuffs … I can’t believe it. Remember that? She went to Vietnam to find out how nice they were. They weren’t too nice to her, by the way.”

“They arrested her today, Jane Fonda, nothing changes! Every 25 years they arrest her!”

We are in the US Senate Hart building where @Janefonda was just arrested for the 4th time demanding #ClimateJustice and uplifting the disproportionate effects on women from climate change. #FireDrillFriday 🔥 pic.twitter.com/UCZKDqqxge

According to Fonda, “Change is coming by design or by disaster. A Green New Deal that transitions off fossil fuels provides the design.”

The Green New Deal that Fonda referenced, put forward by Ocasio-Cortez, calls for a Soviet Union-style 10-year mobilization, which would take all gas-engine cars off the road and upgrade or replace every home and commercial building in the United States.

By one estimate, the Green New Deal would cost U.S. taxpayers up to $93 trillion over the course of the mobilization. In comparison, the total projected government spending for the next 10 years is $66 trillion. Later on, Democratic socialist presidential candidate Bernie Sanders (I-Vt.) proposed his own version of the Green New Deal that he says would cost far less, though still a whopping $16.3 trillion.

Fire Drill Fridays claims to put pressure on governing bodies and decision makers by means of protests, rallies, and a campaign of civil disobedience at various locations each week on Fridays. The movement echoes the ‘Fridays For Future’ movement called into life by 15-year-old Swedish activist Greta Thunberg.

In an interview with The Laura Flanders Show, Fonda said, “We have to do everything we can now—this is the time. We only have 11 years. Leave our comfort zone and become more of an activist.”

“As Greta says, ‘Our house is on fire. We have to behave like it is,'” she said, referring to Swedish teen environmental activist Greta Thunberg.

.@GRITlaura interviews @JaneFonda moments before they and @TedDanson are arrested at #FireDrillFriday Tomorrow 11/1 at 11am ET join @JaneFonda @VDay @womensmarch @codepink @emirawoods @RoArquette @NewOrleansBA @GretaThunberg for a rally & civil disobedience at the US Capitol! pic.twitter.com/Q2izxFcGBm