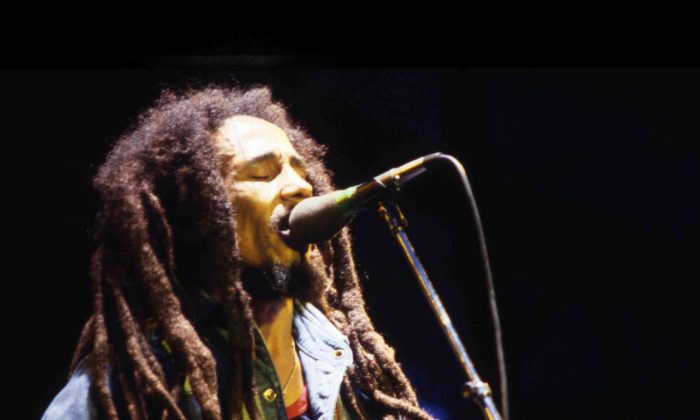 Jamaican Reggae singer Bob Marley performs on stage during a concert in Bourget, Paris, on July 3, 1980. (AP Photo/Str)
The Dead End of Communism

Marley supported a monarchy, was critical of Cuba, Ethiopia, and Russia

First and foremost, according to Marley, he was a spiritual man who believed in God, and belonged to the Rastafari movement. He was later baptized into the Ethiopian Orthodox Church before his death. Throughout his life, in his music, Marley never endorsed any political system but was a proponent of rights and freedom.

In July 1978, he was asked by interviewer Jeff Cathrow about the Rastafari movement and the socialist government of Jamaica under Michael Manley.

Marley: “No mon! Michael Manley is a Marxist-Leninist-Socialist, Rasta is a monarchy. Dig It!”

Interviewer: “Do you think Manley will be overthrown?”

Interviewer: “If something happened to Manley, what do you think would happen to Jamaica?”

Marley: “ANYTHING that ‘oppen, it have to be better!

A few months before the interview, Marley held hands with Manley, a democratic socialist who was close with the Cuban communist government, and Manley’s rival, Edward Seaga. Years before, Marley had performed for and helped promote Manley, but after he was elected, Marley became disillusioned with politics. He also survived an assassination attempt in 1976.

Marley, in September 1980—the final interview before his death—was asked about Cubans in Ethiopia who were supporting Mengistu Haile Mariam, a Maoist communist who historians estimate killed 1.5 million people via man-made famines and through purges of his political opponents. Mengistu and Fidel Castro were allies, with Cuba sending some 17,000 troops to Ethiopia in 1977 and 1978.

In an interview with Anita Waters, he didn’t express a favorable view of the then-communist governments of Russia and Ethiopia

Anita Waters: Anything else you want to tell your public?

Marley: Well, I did know that this year is the fiftieth year – pass them back to Rasta.

Waters: The fiftieth anniversary of the coronation of His Imperial Majesty, Emperor Haile Selassie the First.

Marley: Is the Golden Jubilee, that’s it. November 2nd. Been 50 years now since Christ government set upon earth, returned to earth. The Russians can’t take guns and destroy it you know. Bad man.

Waters: The Russians are trying?

Waters: What do you think about the Cubans there?

Marley seemingly was referring communist leaders’ promotion of atheism, while at the same time promoting an materialist understanding of nature and the universe. In the Soviet Union, various forms of Christianity were subjected to persecution and suppression campaigns, while the Chinese Communist Party has more infamously suppressed all religions. Mengitsu was no different: in 1977, he ordered the executions of numerous religious leaders, including the Patriarch of the Ethiopian Orthodox Church, Abuna Theophilos.

Emperor Haile Selassie was deposed in a military coup, and historians believe Mengistu ordered “the emperor’s body to be buried head down in the palace and had a lavatory erected over the grave so that he could express daily his contempt for the monarch.” It’s believed that the Derg killed the emperor.

Mengistu was found guilty of genocide on Dec. 12, 2006, and was later sentenced to life in prison in 2007. He currently lives in Zimbabwe, where he’s protected by despotic leader Robert Mugabe.

Estimates for the number of deaths under Mengitsu’s 17-year reign range between 500,000 and 2 million. He also forcible relocated 700,000 farmers under the pretext of fighting famine, but it was widely seen as an attempt to break up rebel sympathizers in the eastern portion of the country.