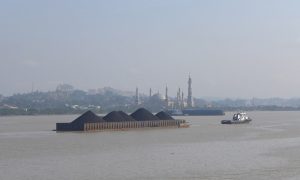 Not So Sunny in Patagonia

The U.S. Forest Service recently gave the green light to the “Sunnyside “mineral exploratory drilling project — a plan to drill 18 bore holes at six sites in the Patagonia Mountains in hopes of finding silver ore and creating larger mines. Despite the project’s deceivingly cheerful name, this exploratory drilling could have major impacts on both the mountains and the species that depend on this diverse “sky island” habitat for survival. And if mines are ever developed in this sensitive area, the outlook would not be so sunny for wildlife and water quality.

Situated in Arizona’s Coronado National Forest, the Patagonia Mountains are home to dozens of species listed as threatened or endangered under the Endangered Species Act (ESA), including jaguars, ocelots, lesser long-nosed bats, Mexican spotted owls, and the just recently listed yellow-billed cuckoo. The narrow topography of Humboldt Canyon, where the drilling is planned, would magnify the noise of the project’s non-stop drilling, making for a very loud 24 hours a day, 7 days a week, 6 month long headache. The noise produced by the drilling would reach 98 decibels, which is akin to riding a motorcycle or operating a chainsaw. Let’s take a closer look at the impact the project could have on some of the species in the area:

Almost completely eliminated from the United States, both the jaguar and ocelot are listed as endangered under the ESA. Unfortunately, the Sunnyside Project lies in the middle of the jaguar’s formally designated critical habitat, and in an area important for ocelot recovery. For felines like jaguars and ocelots, this area is a critical corridor, connecting habitat in Mexico to habitat in the U.S. and allowing the animals to travel between these areas. Between the noise that drilling will produce round-the-clock and the light required for drilling at night, these cats will be driven away from one of the few areas that gives them access to good habitat north of the border, and those few cats already here will be cut off from the rest of the population in Mexico.

The lesser long-nosed bat is another endangered animal with a lot to lose: The Patagonia Bat Cave, a roost for mother and baby bats, is only five miles from the mining project area. Lesser long-nosed bats can go in search for food up to 36 miles away from their roosts, and there are eight additional roosts within feeding range of the Sunnyside Project, putting many more bats at risk. In addition to the drilling noise and artificial nighttime lighting, the project will clear vegetation around the drill pads, including agaves, a primary food group for the lesser long-nosed bat.

The threatened Mexican spotted owl has the most to lose from the drilling. Five of the six drilling sites are within a “Protected Activity Center,” the most important part of the Mexican spotted owl’s designated critical habitat. At least one breeding pair is known to live there. With a noise level of 98 decibels (the owls are negatively impacted at 69 decibels) this pair will be driven out of their nesting area. One of the drilling sites is only one-tenth of a mile from the core nesting area, a distance of just two or three city blocks. With the noise of the drilling, the owls might just as well nest on a busy street corner in Washington, DC!

And just about anything that drinks water

The Sunnyside Project would also have a negative impact on the area’s water, which impacts not only wildlife, but humans too. The waters of Harshaw Creek and Alum Gulch originate in the Sunnyside Project area and provide a critical source of drinking water for residents of the Town of Patagonia and wildlife alike in the watershed. Earlier this fall, heavy rainfall in the Patagonia Mountains led to flooding, which swept debris and pollution from historic abandoned mines into the creeks, turning Patagonia’s water supply a nasty shade of orange from heavy metal pollution and acidic drainage from the mines. And the drilling wouldn’t stop at damaging the water quality – it would impact quantity as well. The drilling alone requires 12,500 gallons of water per day, which is just over 10% of the water usage for the entire town of Patagonia. Over the course of six months, the mining project would use enough water to fill over three Olympic swimming pools of 660,000 gallons each. With the 18 drill holes reaching depths of up to 6,500 feet, they’re bound to disrupt the area’s aquifer which is typically encountered at 1,000 feet, posing additional risk to the Town’s water supply.

It’s clear that when the Forest Service rubber-stamped their approval for the Sunnyside mining project, the agency turned a blind eye to the impacts that round-the-clock drilling will have on threatened and endangered species in the Patagonia Mountains, and the Town of Patagonia’s water supply.

Defenders has objected to the mining projects in the Patagonia Mountains every step of the way, and we’re now turning to a federal court to hold the agencies accountable for their unlawful approval of the Sunnyside Project. The area’s valuable wildlife habitat, water supply, and handful of threatened and endangered species deserve protection, not pollution.

This article was originally written and published by Anne Russell Gregory, the Conservation Law Coordinator at Defenders of Wildlife. For the original article and more information, please click HERE.