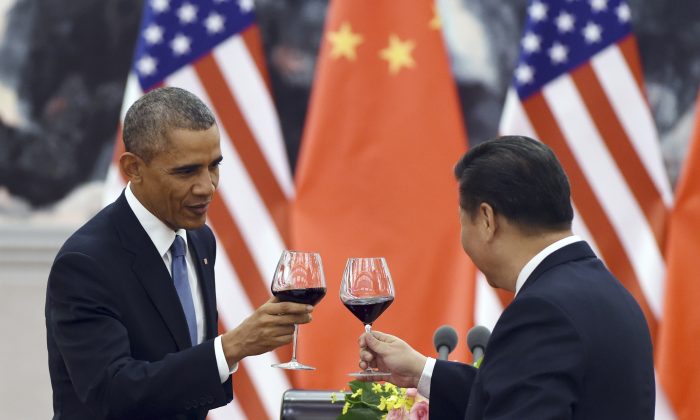 President Barack Obama (L) toasts with Chinese President Xi Jinping at a lunch banquet in the Great Hall of the People in Beijing on Nov. 12, 2014. (AP Photo/Greg Baker)
China

Chinese leader Xi Jinping’s upcoming state visit to the U.S. has many overseas media speculating on the potential topics to be brought up during the talks with President Barack Obama, from regional tensions caused by Beijing’s activities in the South China Sea, human rights issues, and cyber-attacks.

Other concerns looming large in the recent Sino-American dynamic include economic issues highlighted by the results of the recent Pew Center poll, including U.S. Treasury holdings, the employment shift to China, and the American trade deficit.

The U.S. will surely talk about and focus on detained rights lawyers such as Wang Yu, Gao Yu and a release list might be proposed. Looking at past meetings, these efforts are not likely to bear much fruit. Perhaps Beijing will give a show of “sincerity” and release the seriously ill Gao Yu.

The issue surrounding the controversial “Nine-dash line” is really just a power struggle over who gets to play the decisive role in the region.

Cyber-attacks are another hot-button topic. American intelligence complaints of blurred lines between the Chinese military and business sectors will meet with little more than protest from the Chinese Foreign Ministry and rhetoric from Beijing, since they have no second Snowden in their hands.

Neither is the issue surrounding the controversial “Nine-dash line” delineating Beijing’s claims in the South China Sea likely to be concluded, as it is really just a power struggle over who gets to play the decisive role in the region.

Chinese illegal immigrants could be a point brought up at the Xi-Obama summit. According to U.S. immigration authorities, there are 39,000 Chinese in the country illegally awaiting deportation, including 900 “violent criminals.” Likely China will demand the extradition of fugitive officials wanted for corruption such as Ling Wancheng (brother of deposed high-ranking official Ling Jihua) and Guo Wengui.

As American industrial capital and manufacturers withdraw from the increasingly expensive Chinese labor market, the phobia of China stealing U.S. jobs is now a non-issue. The “Made in the USA, Again” slogan made by the Boston Consulting Group in May 2011 is becoming reality, as China faces both manufacturing closures and a rising tide of unemployment brought on by shrinking foreign investment.

In 2010, then-vice premier Zhang Dejiang revealed that foreign companies provided China some 45 million jobs, and when taking into account the domestic enterprises indirectly supporting these international investors, hundreds of millions of workers are involved. For China to lose a third or half of these would be devastating.

What is most worrying is the trade deficit the U.S. is experiencing with its Chinese partner. This is the direct result of accepting China as a World Trade Organization (WTO) member. According to a Chinese customs report on Sept. 8, the country’s imports and exports both continued to decline this August. The total export revenue was $197 billion, down 5.5 percent. The lowered exports were mainly caused by a downturn in trade with the European Union and Japan, but exports to the United States and ASEAN states maintained growth.

Sino-American trade, amounting to 14.1 of China’s total foreign trade value, came in at $355 billion, an increase of 2 percent.

The United States has criticized the Chinese government for exacerbating the trade imbalance by providing export subsidies to domestic enterprises (causing foreign dumping) while charging high tariffs on U.S. imports coupled with exchange controls. But when China joined the WTO, there was no specific requirement on China’s foreign exchange regulations, and matters such as the governmental subsidies can only be solved by initiating the WTO’s internal dispute mechanisms.

Expecting such talks to persuade China to abandon the subsidies and reduce tariffs was already virtually impossible; in the current Chinese economic downturn, it’s even less likely. Any promises the Chinese could make would be empty rhetoric.

Holding dollars as foreign exchange reserves is a common practice among emerging market countries, and U.S. treasurys are usually the best choice. China now holds an amount of treasurys second only to Japan. In February this year, China’s total holdings of U.S. treasurys and securities were $1.2 trillion, only slightly less than what Japan holds.

Considering the size of China’s foreign exchange reserves, the impact of China selling U.S. treasurys would be much greater than that from other countries.

Since mid-August, when China announced the devaluation of the yuan, the currency has been selling fast. To stabilize the yuan’s exchange rate and prevent further devaluation, the Chinese government sold about $200 billion in treasurys.

Considering the size of China’s foreign exchange reserves, the impact of China selling U.S. treasurys would be much greater than that from other countries. In the past fiscal year, treasurys contracted in every quarter because China’s state-run banks have been buying yuan to stabilize the exchange rate.

For China to protect its currency from the impact of the devaluation is crucial importance; moreover, the United States now also sees that the consequences of the yuan devaluation are not necessarily beneficial. Both sides have a “common interest” in U.S. treasurys.

In sum, not much is to be expected from Xi Jinping’s upcoming state visit. The many disputes over economic economic interests will only allow for consensus and collaboration on vague topics such as climate, “sincerity,” and lists of “expectations.”